What is a ‘Crash for Cash’ Scam? 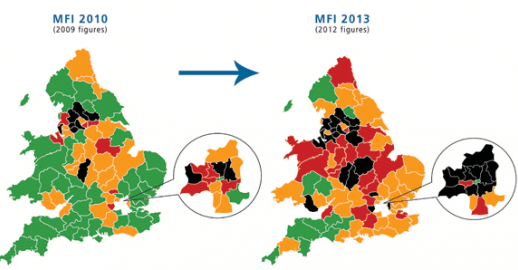 Insurance fraud is very often seen as a victimless crime against a faceless corporation that is more than capable of paying out any amount of money. However, insurance fraud affects us all, as the cost of it simply increases everyone’s motor insurance premiums. Recently, an insidious form of insurance fraud has emerged and as a nation we are already beginning to see both the financial and human costs.

This particular fraud has attracted a lot of media attention and has been referred to commonly as ‘Crash for Cash’. This is where criminal gangs are faking or deliberately causing accidents for the purpose of submitting exaggerated insurance claims.

As is shown by the Motor Fraud Index, insurance fraud is on the increase all over the country[1]: 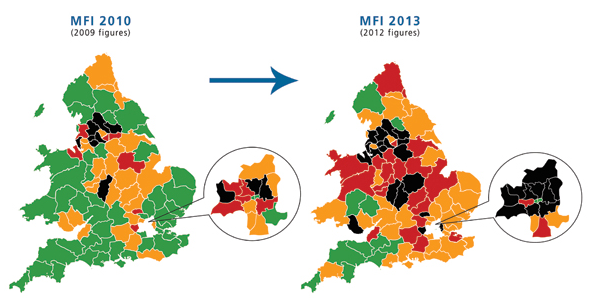 ‘Crash for Cash’ is no exception to the rule. It is no longer just a problem in ‘hotspots’ within the major cities, it is now starting to spread. Look at the map above, the number of low risk areas for fraud (marked in green) have largely disappeared over just 3 years.

So what is this costing? Each day insurers uncover 381 fraudulent claims, with a resultant saving to the insurance industry of a staggering £1 billion per year. The Association of British Insurers estimates there is a further £2 billion of fraudulent claims that go undetected per year. Of this £2 billion of undetected insurance fraud, it is estimated £392 million is as a result of these ‘crash for cash’ scams.

As well as the financial costs involved in ‘crash for cash’ scams, there is also a human element. By the very nature of this type of crime; people are going to get hurt and will also have to undergo the stresses involved in having a traffic collision. These incidents have led to some serious injuries and even fatalities.

Of the £2 billion proceeds of undetected fraud, much of it (particularly that associated with crash for cash) will end up in the hands of organised criminal gangs. This money will then be used to fund other criminal activity including drugs, firearms trade and people trafficking. The costs associated with this type of fraud are not only financial and human – but can also have a damaging impact on society as a whole.

The fraud crime rings are often large operations with many parties involved, and this complexity is often difficult to detect. These networks will comprise of:

The reason that dismantling these networks is so difficult is that the people who are more likely to be caught are those at the bottom of the chain, and those at the top of the chain create layers of middle-men between themselves and the law.

The insurance industry, which has an initial responsibility to its shareholders, staff and policyholders, also finds that it is involved in trying to aid the wider society as a whole in its fight against insurance fraud. The insurance industry spends approximately £200 million a year on counter-fraudulent activity.

Due to cuts in police funding, and a concern that insurance fraud is “low down” any Police priority listing, the insurance industry has begun funding a Police Department known as IFED (Insurance Fraud Enforcement Department). It has in one year made hundreds of arrests and is out to change the public perception that insurance fraud is a victimless crime and to deter fraud by holding those who commit these crimes to account.

In addition to the IFED there is also the IFB (Insurance Fraud Bureau); a non-profit organisation, set up by the insurance industry to counter fraud. The IFB works directly with the insurance companies themselves in combating fraud – often helping to bring cases to the IFED.

The industry also has a wide range of databases at its disposal that can be used to help counter fraud including the CUE (Claims Underwriting Exchange); the MIAFTR (Motor Insurance Anti-Fraud and Theft Register) and the IFR (Insurance Fraud Register). These databases are used by insurance companies across the industry and across classes of business enabling the easier detection of insurance fraud.

Finally, the companies within the industry itself are becoming more fraud aware and are training staff in their claims departments in better processes to assist them in identifying and pursuing those who are committing these crimes. The first opportunity to spot car insurance fraud will occur when a claim is first notified to a claims handler. They are now much better equipped to detect, pursue and convict fraudsters compared with at any other time.

Unfortunately, there is almost nothing you can do to avoid becoming a victim of a ‘crash for cash’ scam – if they target you, you will almost certainly be involved in the crash.

If you suspect that this may have been a ‘crash for cash’ then there are steps you can take to minimise the risk:

The battle against insurance fraud is constant. As stated, there is a public perception that fraud is a victimless crime. However, fraud is creating havoc on the roads at a massive financial, human and societal cost. The industry is doing all it can to combat this crime to protect road-users by deterring this dangerous practice. Importantly, their work, if successful, may help to reduce premiums as approximately £50 of every motor insurance premium is to pay for undetected insurance fraud.

In the meantime, be informed. If you suspect that you may have been the victim of a crash for cash scam then collect evidence, report it to your insurer and inform the IFB. A well informed public is the first line of defence. If you spot it then do your part to combat crime and inform the relevant authorities. It will potentially save you a lot of hassle and ultimately will bring costs down for all drivers and society as a whole.

See also: What is a ‘Flash for Cash’ Scam?

[1] http://www.keoghs.co.uk/files/Overview_-_Motor_Fraud_Index_2013_-_website_SECURE.pdf - a legal firm who specialise in looking into fraudulent activity in car insurance claims.