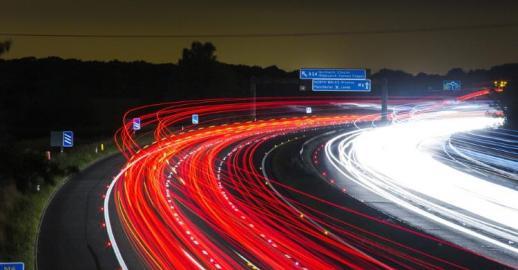 From the arrival of the first traffic light system in the UK in 1868, to the invention of the speed camera in the 1960s, the implementation of new technology has long been a way to keep our roads safe. But how is modern-day technology affecting traffic and the way we drive? Is technology really the solution to road traffic accidents, or could it sometimes be the cause?

How Safe Are Smart Motorways?

Smart motorways were first introduced in the UK in 2006 on the M42. The roads use Active Traffic Management (ATM) and they are designed to control the flow of cars by allowing use of the hard shoulder at busy times and enforcing varying speed limits. They work using sensors fitted in the road and cameras on gantries. There are currently four types of smart motorway:

Despite the potential for this technology to improve the country’s roads, plans to increase the number of smart motorways across the UK have been stopped due to safety fears. The Campaign for Safer Roadside Rescue and Recovery (CSRRR) believes that the removal of the hard shoulder prevents drivers from pulling over and leaving their vehicle safely in the event of a breakdown.

So is technology making our roads safer or putting motorists at risk?

Highways England claim that most road users feel confident driving on smart motorways, and that they are safer and improve the journey time. But there is always more the authorities can do to improve safety on our roads.  Highways England are working on making emergency areas more visible, as well as introducing stationary vehicle detection.

In October 2018, new hi-tech cameras were tested in New South Wales, Australia. The cameras were designed to detect motorists who were using their mobile phones whilst driving.  During the month long trial more than 11,000 drivers were caught by the cameras.

The cameras used a radar-based sensor system to detect vehicles and take photographs, the data was analysed by artificial intelligence before being reviewed by a person. It is hoped that the changes of being caught and fined will deter motorists from using their mobile phones whilst driving.

In 2017, 33 people were killed on UK roads due to motorists using their phones.

In 2017 Apple released an iOS 11 iPhone update to include an automatic Do Not Disturb While Driving Feature.  When the iPhone is in mode, the screen turns off and the phone blocks notifications so that the user is not distracted whilst they are driving.

The feature can be customised to let certain ‘favourite contacts’ call or text and can send an automated message to let contacts know that they are driving. The phone detects when the user is driving so this mode can be turned on automatically, or the user can turn it on manually through the cars Bluetooth.

There is also a free Driving Detective app for Android phones which works in a similar way.  This is a useful feature to have on your smartphone, but it suggests that despite knowing the dangers of being distracted whilst driving, some drivers cannot help but be tempted to view their phones when they receive a notification.

What Does The Future Hold For New Motoring Technology?

With more and more manufacturers offering electric vehicles and the prospect of driverless cars looming on the horizon, the next decade could be a real turning point for the motoring industry.  But it may be some time before our cities are filled with autonomous vehicles.  The debate continues regarding whether or not these vehicles are safe or if they pose a threat to other road users?

Technology has already brought us innovations such as parking sensors, automatic headlights, dash cams and cycling cameras to improve the road users’ experience.  Last year, Highways England announced the installation of innovative LED road studs at Switch Island in Merseyside.  The road studs light up when the traffic lights turn green so that drivers can see which lane they should follow, reducing the risk of drifting and collisions.

How long will it be before this and other technologies could dramatically reduce the number of accidents on the UK’s roads?