The Law And Using Your Mobile When Driving 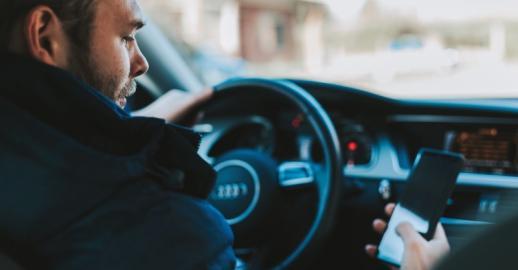 Over the last decade there has been an increase in the legislation to increase the level of safety on our roads. The introduction of smartphones, and their subsequent importance in our day to day lives, has become another dangerous distraction and influences our driving behaviour.

It was no surprise therefore that new laws were introduced in 2017 to help curb the use of mobile phones whilst driving, in an attempt to reduce the number of accidents and fatalities caused by distracted drivers who were on their phones.

Many motorists however, are still unaware of when they are, or not, allowed to use their mobile phone when they are behind the wheel. To set the record straight, we have put together a comprehensive guide to the law behind mobile phone use whilst driving.

When shouldn’t you use your phone?
The law on using your mobile phone whilst driving changed in March 2017, enforcing stricter punishments for those caught doing so. The new legislation means that it is illegal to use your phone or satnav whilst driving, or whilst riding a motorcycle.

When can you use your phone?
In order to remain in control of your vehicle, the law allows motorists to use their mobile phones or satnavs if they are hands-free; this means being able to access these technologies without any physical motion and without distracting the driver.

The concept of this legislation means that all of the above methods are legal only when they do not distract the driver from driving, and that they remain in control of the vehicle at all times. Picking up the phone to then dictate voice commands, or change the destination on a map app for example, is breaking the law. This also includes actions like skipping music, unlocking your phone and even declining calls.

The basis of the legislation means you can only use your phone if your vehicle has stopped and is safely parked.  A motorist can also use their phone behind the wheel in the event of an emergency, calling 999 or 112, but only in the context in which stopping your vehicle would be considered impractical or unsafe.

Since 1st March, 2017, the driving penalties have doubled for motorists, resulting in six points and a £200 fine to emphasise the seriousness of using a mobile whilst driving.  The new law applies to motorists in England, Scotland and Wales.

Motorists who are caught using their mobile twice or accruing 12 points on their licence will face magistrate’s court, being disqualified and fines of up to £1,000.

Transport Secretary Chris Grayling said; “Our message is simple and clear, do not get distracted by your mobile phone while driving.  It may seem innocent, but holding and using your phone at the wheel risks serious injury and even death to yourself and other road users.

Doubling penalties will act as a strong deterrent to motorists tempted to pick up their phone while driving and will also mean repeat offenders could find themselves banned from our roads if they are caught twice”.