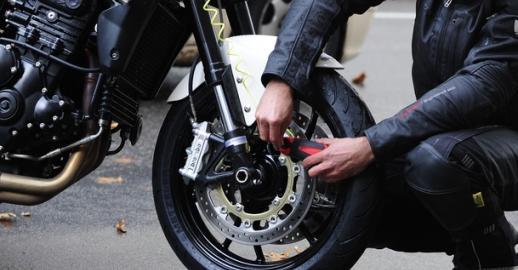 It is a sad fact of life that motorbikes are regularly stolen, and that is why as a motorcyclist you should have security at the forefront of your mind whenever you park up. There are a vast array of security devices on the market to suit all sorts of needs. In this article we will look at the different measures you can take to secure your bike whether it is at home or on the road.

Thatcham Research are an organisation and research facility that primarily supply and administer a system by which the Association of British Insurers (ABI) place vehicles into groups, according to their levels of security, and therefore determine the degree of risk from theft (which then has an impact on the motor insurance premiums payable). In addition to the vehicle rating system, Thatcham also provide a similar service for other forms of security, including motorcycle locks and chains. Security devices are tested in strength, durability and resilience in various forms, simulating methods which might be used by would-be thieves in attempting to misappropriate your property. Many manufacturers send their locks and security devices to Thatcham to be rated, in the hope of acquiring the coveted ‘Thatcham Approved’ status which can be displayed on packaging in shops and online to assure the consumer of their products integrity.

Several options exist for securing your bike, depending on where you are securing the bike and what you want to secure it to.

First and foremost you should always apply the steering lock, already fitted to the bike by the manufacturer, whenever you are away from the bike. This is the most basic form of immobilisation for your bike and is the minimum effort expected of you by your insurer. Most insurers insist in their policies that you take reasonable measures to secure your motorbike, and this starts with the steering lock. Many motorcycle theft claims are dismissed early on in the claim because the policy holders are found not to have taken these basic steps. Steering locks are usually operated from the ignition key switch and normally involve turning the handlebars whilst moving the ignition key to a certain position. Some older models may have a separate lock to the right hand side of the headstock (this is typical of older British and American motorcycles- often operated by a second, smaller key).

In addition to the steering lock, a disc lock is a convenient method of providing an extra level of protection. Disc locks are usually cast steel made in a ‘U’ shape with a slit just wide enough to slide the lock over the front brake disc of the bike. A steel pin then passes through the brake disc and secures to the lock, much the same as an ordinary padlock. Disc locks will prevent your bike from being pushed or ridden away as the lock is too large to pass through the forks of the bike while attached to the front wheel. Thieves attempting to ride the bike away may cause damage to the disc, brake caliper, fork, or even drop the bike in the process - but at least the bike will remain close to where you left it. Disc locks are compact and can be easily carried in a jacket pocket, a rucksack or top box and are a good choice for short stops or where luggage/storage whilst riding will be at a premium. However, Disc locks will not prevent the bike from being lifted into a van and driven away.

Chain locks are perhaps more conventional than disc locks, but they tend to be heavy and bulky to carry around. Usually placed through the rear wheel, chain locks give the added security of being able to fasten the chain around a solid, static object; eliminating the chance of the bike being lifted into a van (which you do not get with a disc lock). Ideal for garage or driveway use, especially when combined with a ‘Ground Anchor’ where a solid/static object isn’t available. Ground Anchors are, in essence, an amour plated mooring ring bolted to the ground. They can be installed at home in your garage or on your driveway, or even at work, to provide a solid point to secure your bike to.

Extra security may also be considered for your garage- A ‘Garage Defender’ for example. Installed in the same way as a ground anchor, these T-shaped, removable bars sit just outside the doors to the garage to prevent the doors from being opened. Equally, if you have a house alarm, have you considered having it extended to your garage if it isn’t already?

If you don’t have a garage to store your bike in then perhaps consider a motorcycle storage cover. More than just a bike cover, they consist of a light weight, alloy and retractable frame with a fitted cover over the top. Mounted to the ground, you ride the bike into the framework and pull the cover over the bike, completely encasing it. The frame can then be padlocked shut, keeping your bike protected from the elements and out of sight from any potential thieves.

Alarms and immobilisers are increasingly being fitted as standard to new motorcycles and several companies provide the same products for the after-sales market. Datatag are probably one of the most popular and respected alarm and immobiliser manufacturers in the UK. They provide bike manufacturers such as Triumph, Honda and Suzuki (among others) with their ‘Factory’ alarm systems, and their aftermarket products can be fitted to virtually every motorcycle on the market. Not recommended for home installation, this is a job best suited to a reputable motorcycle garage with a technician experienced in installing these alarms, and should take around an hour and a half to two hours to fit, depending on the alarm system chosen and the make/model it is being fitted to. Some manufactures, such as BMW, supply their own alarms to be retro-fitted but can only be purchased from and fitted by a main dealer.

Tracker systems are becoming increasing popular, especially for owners of highly desirable or valuable motorcycles. Some insurers may insist on you having a tracker fitted to your bike before they will offer you cover. This is a method of managing the risk of losing the bike all together. Tracker is a brand and company in its own right. Their systems can only be purchased through and installed by authorised fitters and an annual premium is payable to Tracker for their monitoring services. In return for this premium, Tracker will notify you (usually by phone or by text) every time the bike moves without the key in the ignition and the ignition switch turned on, and they will liaise with the police and insurance companies in recovering the bike should it go missing. Tracker systems won’t stop your bike from being stolen but they do significantly increase the chances of the bike being recovered quickly. Trackers are often used in conjunction with factory alarms and immobilisers to reduce the risk of a total loss to the insurer.

Not all insurers will offer separate discounts on your premium simply for having security devices fitted to your bike and/or garage, but some do. Above all, the practice of keeping your bike safe and secure comes down to common sense, and the more you can do to prevent a loss or claim of any sort is most definitely in your best interests. It is worth considering that the higher the insurance group your bike is in, the more desirable and/or vulnerable it has been deemed by Thatcham and therefore the more time you should take to make sure it is properly secured at all times. You may not see a huge saving on your premium after fitting an alarm, but it will far outweigh the increase in your premium should you have to make a theft claim for a bike that was not secured and is never recovered.