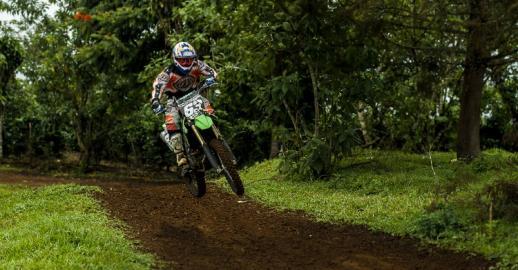 Originally known as Scrambles in the UK, Motocross evolved from trials riding in the early part of the 20th century when delicate balancing and strict scoring lost favour to the more exciting concept of being the fastest rider to reach the finish line in a race around a closed off, off-road circuit. 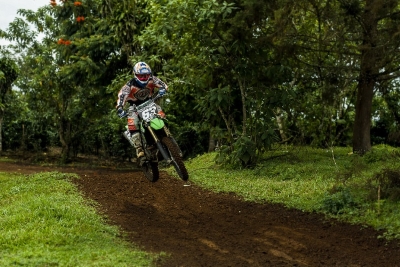 The first known Scrambles race took place in Camberley, Surrey, in 1924; a time when the machines used varied very little from their road-going counterparts. Factories such as Birmingham Small Arms (BSA), Norton, Matchless, Rudge and AJS were dominant in their field.

In 1952 the FIM created the first European Championship for 500cc machines which was upgraded to a World Championship in 1957. By 1962 a 250cc class had been introduced which prompted a turn towards 2-stroke manufactures in favour of their lightweight and agile machines, bringing factories such as Husqvarna (Sweden), CZ (Czechoslovakia)  and Greeves (GB) into the fold.

In the mid 1960’s the popularity of Scrambles, or Motocross as it was becoming known (a merger of the French word for motorcycle [motocyclisme or moto] and Cross Country, had spread across Europe and was about to cross the Atlantic into America. Top European riders of the day Torsten Hallman, Roger DeCoster, Joel Robert and Dave Bickers made the journey to exhibit the sport and kick start America’s fascination with Motocross.  Shortly after this the Japanese manufactures launched a serious challenge against the European machines and took their first 250cc World Championship win through Suzuki at Joel Robert in 1970.

Robert’s 250cc crown in 1970 marked the start of a boom period for Japanese motorcycle technology until the early 1980’s as they changed from air cooled 2-stroke engines to water cooled versions and lead the move away from the traditional twin-shock rear suspension in favour of the more modern single shock.

By 2003/4, changing environmental laws in California saw manufactures pressured to find a more environmentally friendly approach to vehicle emissions and motorsport in general which prompted resurgence in new, cleaner  4-stroke engines. Most major manufactures made the switch back to competing on 4-stroke machines as there are close links to winning machinery on track and on-road sales. European firms also saw the benefits of this with the revival of brands such as Husqvarna, Husaberg (Sweden/Austria) and KTM (Austria) winning World Championships on 4-stroke machinery.

The sport has since further evolved into a number of subcategories such as Supermoto, Supercross, Arenacross and Freestyle Motocross (FMX) along with classes for ATV’s, Quads, Pit/MiniMoto bikes and sidecar/side Jeeps.  You can also find events organised around Vintage Motocross (VMX)- typically motorcycle models predating 1975 and ‘Post Vintage’ which includes the period between VMX and 1983.

Motocross, like all other motorsport, is accessible at many different levels to reflect the ability of riders and specification of the machinery they are riding. The sport is governed at each level by an appropriate authority in the sport that issues rules and guidelines and administers all aspects of the sport and racers under their control.

The Federation Internationale de Motocyclism (FIM) is the world’s governing body for motorcycle racing. Founded in 1904 and with its headquarters in Switzerland it oversees all World championship level competitions, 65 in all, as well as representing 111 national motorcycle federations divided into 6 continental unions.

Motorcycle racing in the UK is governed by the Auto-Cycle Union (ACU), a founder member of the FIM. The ACU oversee all national and club level completion within the UK and are also responsible for issuing Competition Licences. Anyone wanting to complete in motorcycle racing must first apply for and maintain licences for each class they wish to compete in. Many riders and clubs alike join the ACU as members to gain access to the many varied benefits associated with membership as well as allowing entry to club, national and international level completions. Competition licences are renewed on an annual basis.

Motocross is typically split into 2 age categories- Adult and Youth. Some youth championships allow entry from as young as 6yrs old but are sub-categorised into 2-3year age groups; for instance 6yrs-8yrs, 7yrs-10yrs, 9yrs-12yrs, etc.  Entrants to the adult classes are generally accepted from 16yrs for most classes provided the relevant competition licence has been obtained. Many classes also have upper age limits, typically 50yrs for adults.

How to Get a Motocross Racing License

In order to obtain a Competition Licence you must first register your details with the ACU. Once registered you may complete the application form selecting your chosen classes in which you wish to compete (you can have more than one class on your licence much like a DVLA driving licence); this might be MX, Trials & Enduro for example. The application should be submitted to the ACU along with a recent photograph and the relevant payment.  Your application will be considered and usually a licence issued. Unlike a Road Race Licence, there are no requirements to attend pre-licensing theory or practical courses, although you are required to be a member of an ACU affiliated club before applying.

Your licence will have to be presented when signing in at each event you attend. You will only be permitted to enter competitions for which you are licensed to ride in. Day licences are sometimes available for certain events which will permit you to enter a single event of the day of issue.

Competition entries are typically made through the ACU website.

Getting Started in Motocross

The best way to start out in Motocross is to find your local club or practice track and pay them a visit. It’s advisable to call them first and arrange to meet a representative of the club at the track.  Motocross is a relatively inexpensive form of motorsport to participate in for the novice and intermediate riders but there are some essentials that all riders will need to consider when thinking about taking part.

Firstly, Motocross bikes aren’t road legal. While you can buy what looks like the real thing from your local motorcycle dealer there are a few key differences between the road-going machines and their true off-road cousins. Road-going bikes will be fitted with a headlamp, tail lamp and indicators all of which are not permitted on a race track. Number plates need to be removed and plastic bodywork changed; a degree of fettling would be required to prepare these bikes for track use. However, if you ask your dealer to see the off-road range they will be happy to order you a bike that will arrive ‘track ready’. However, as we mentioned, because these bikes are not road legal you will need some other form of transport to get your bike to and from the track. Vans are the most popular solution to this problem as they also provide a good storage area for spare parts, tools and the rest of your equipment as well as somewhere to shelter in bad weather; an awning mounted on the side makes an excellent garage for running repairs and adjustments during the day. Alternatively a trailer coupled to the rear of our car will suffice.

You will need specific motocross gear for riding in; Helmet, goggles, body armour/neck protector, gloves, boots and suit. Depending on where you are riding, the weather conditions and the type of track it is, it’s generally advisable to carry spare gloves, helmet liners and goggles in your bag; dirt and sweat will rub and irritate causing sores and discomfort if left all day.  A jerry can for fuel (and 2-stroke oil for mixing if required) is essential as is a bike stand (MX bikes don’t have side/kick stands). Engine oil, several liters of fresh water (for washing down as well as drinking) and a basic tool kit will also be needed. Motocross is a physically demanding sport so a folding camp chair and some snacks are also a good idea for the periods in between practices/races.

A practice day at a MX track will typically comprise of two or three classes who will take it in turns to use the track. A 20 minute Moto will give you plenty of time to learn a new track, gauge your bike set-up or just practice your skills.  You then have 20-40 minutes to rest, make adjustments or repairs while the other groups are on track before your next session. If you are there for the whole day you can expect to get between 4-6 sessions on track. Some tracks also offer twilight sessions in the evenings when light permits.

A race event will work in a similar pattern but will usually take place over a weekend. All machines must go through technical control before going on track to make sure they are safe and adhere to the rules of the track/competition.  This will be followed by practice sessions on the Saturday along with qualifying.  Sunday is race day and will follow a strict time table of events. Rather than counting a number of laps, a Moto will usually be a set amount of time plus a select number of laps; for instance a moto might last for 15 minutes plus 2 laps, rather than a 30 lap race.

In summary, if you think Motocross is for you then get along to your local club track and see what it’s all about. There is an initial layout involved in getting kitted out from scratch if you don’t already have a bike but it is probably the most affordable and accessible means of competing in motorsport and offers many, many opportunities to diversify if you so choose. Motocross is a close-knit, friendly and lively community; there is never a dull moment no matter where you finish!