For £53,000, is this Mercedes-Benz V-class Marco Polo the perfect luxury camper van for summer adventures? 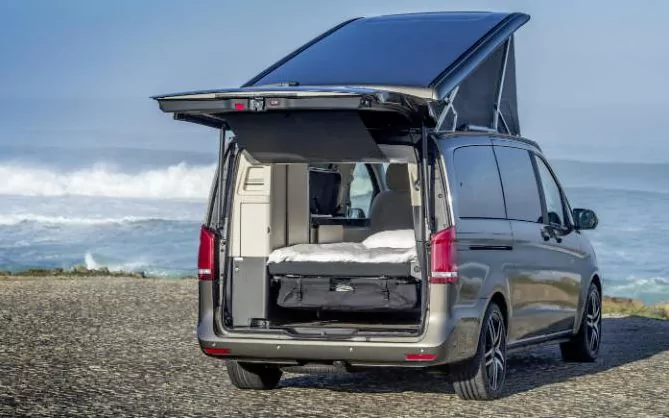 Summer is fast approaching, and that means many of us will be turning out backs on the 9 til 5 to escape, temporarily, from the daily grind. This might mean hopping into a luxury camper van and heading out onto the open road, and perhaps this Mercedes-Benz V-class Marco Polo ticks all of the right boxes?

Wanderlust. It's a difficult, little-understood condition known to strike people of all ages, with symptoms often continuing for months or even years.

It can be exacerbated by prolonged exposure to the office, commuting by rail, going back to work after a bank holiday, other people's holiday photographs and the news, while those who have used up their entire holiday allowance for the financial year tend to be the worst affected.

Previously, treatments have involved the use of aircraft, but these have recently been shown to have worrying side-effects. In their place, we recommend a tried-and-tested traditional remedy – the camper van.

This one isn't cheap. At £53,180 for the basic model, and with prices rising to around £60,000 for the top of the range AMG Line version with all the trimmings, the Mercedes-Benz V-class Marco Polo is very much the opposite of a Ryanair flight and three nights in a hostel bunk bed. Travellers on a budget might prefer something like the SsangYong Turismo Tourist, a similar camper that costs around half as much.

But for buyers in search of a premium 'glamper van' experience, the Marco Polo is difficult to beat. It's based on the V-class, a strong – if expensive – MPV choice in the van segment that has formed the backbone of Europe's airport shuttle fleet since its introduction in 2003.

As such, it's pretty van-like to look at and it'll be van-like to drive, but that's a small price to pay for the flexibility afforded by a real camper van. You have seating for four people, which can be converted into sleeping arrangements for two couples (or two sets of amicable homies).

You also have a simple galley kitchen and an eating space, as well as a stowed table and chairs for al fresco dining.

Of course, it's not as straightforward as this. Cooking, eating and sleeping in a confined space is difficult in a practical and psychological sense, while Alex Robbins became familiar with the realities of campervan life when he took a VW California to Norway. That leaves two glaring faults left – the £53,000 price tag, and the total lack of lavatory. People who have £53,000 to spend don't always enjoy going to the loo outside. But for those who have the cash to splash, the V-class Marco Polo ticks a lot of boxes on paper. Expect to see a steady stream of these campers trundling through Calais in 2017.

There’s no doubt that the Mercedes-Benz V-class Marco Polo offers travel with style! It’s a fantastic example of a ‘glamper-van’ and could easily satisfy any wanderlust needs you may have, albeit for a hefty price-tag.