Be prepared next time with this winter driving checklist 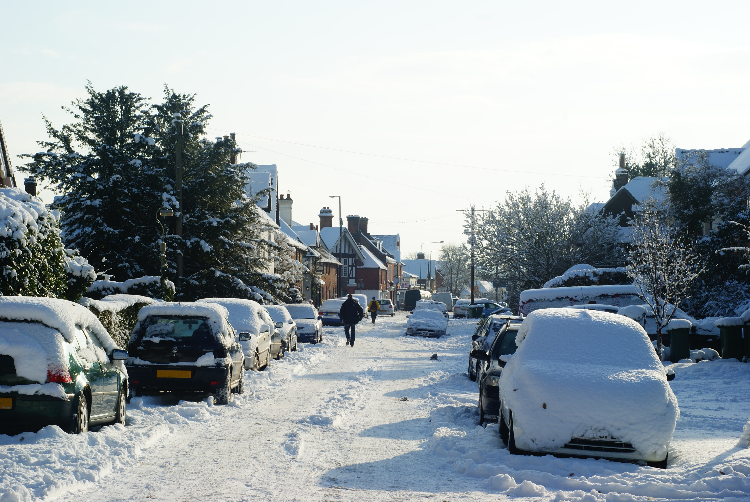 Less than a third of drivers say they carry a shovel in their car in winter, but you can be much more prepared by filling your boot with some of these necessary supplies.

When snow falls the UK tends to come to a standstill, much to our frustration.

Earlier this month, the white wash of powder saw weather warnings, flight delays and plenty of drivers stranded on motorways and other routes - and cold temperatures meant that the snow and ice stuck around.

Even if you weren't one of those unfortunate enough to be trapped in their cars, there's a very good chance it could happen to you at some point when the temperatures drop and heavens open. So are you prepared?

Here is a checklist of everything you should carry in your car in case you're caught out by snowfall and freezing conditions.

You're legally required to clear your front and rear windscreen of snow and ice before driving your car - or else face a £60 fine and three penalty points on your licence.

But they're also essentials to keep in the car at all times during the winter months in case you do get stranded and the glass has a fresh coating of the white stuff in the time you're at a standstill.

You've removed all the snow and ice from your windscreen but all the grit, muck and slush on the road means the glass will quickly be difficult to see out of again if you do get on the move.

Having some extra screenwash will at least guarantee that you can see clearly at all times and the fluid won't freeze in the chilly temperatures.

Carrying a wind-up torch is a good option. Alternatively, carry a spare set of batteries that fit your torch in case the ones in it are dead.

Thinking about taking that old winter coat to the charity shop? Instead, store it in the boot of your car with a warm pair of gloves in the pocket and a scarf stuffed up one of the sleeves.

It will be a much welcome stash if you do get caught in a snowy jam and don't have enough fuel to run the engine and heating system in the freezing conditions.

A large blanket - big enough to spread across two passengers in the back - is also recommended.

Carrying a spare pair of shoes is always a good idea - wading through snow, ice and slush will soon dampen your footwear and soaked feet is never pleasurable.

This is why carrying a durable pair of boots is essential, especially some with plenty of grip on the sole to limit slipping and sliding when exiting the vehicle.

If you have a spare pair of waterproof boots kicking around, sling them in your car's luggage compartment now.

If there's a significant downfall and you're stuck on a smaller road then there's every chance you might have to dig yourself out.

You probably don't want to take up all of your available boot space with a spade, but you can get space-saving foldable shovels for £10 or less.

In some countries it is a legal requirement to carry a high-visibility in the car with you, but not the UK.

That said, it will come in handy not only as an extra item of clothing in freezing conditions but also to attract the attention of other drivers if you find yourself stranded somewhere in the dark.

Many already carry a phone charger in the car, not just to boost the power on their device but also to link their music to the audio system in the vehicle.

It will definitely come in handy if you do get stuck in snow, as bad luck would dictate that you've got less than 10 per cent battery remaining on the day you happen to get stranded.

If you don't have built-in sat-nav and can't rely on your phone for directions because it has ran out of battery, having a road atlas with you will be extremely handy.

Not only will it navigate you to other routes but will also be useful if you have to leave the car on foot and locate the nearest fuel station or town centre.

Why would you be out looking for a fuel station with your road atlas? It might be because you've had your car running for so long to keep the heating on that you've burned through all the fuel you have.

There's a very good chance a filling station will have fuel cans for sale, but by having your own you have the guarantee that you won't have to walk all that way to be left empty handed.

11. Something to eat and drink

We're not talking about driving around with a full Sunday roast in the boot gathering mold as each day passes - think non-perishables with long best-before dates, like crisps and water.

The only problem is you have to stop yourself from snacking on it when you don't need to.

A flat or dead battery can creep up on you at any time, regardless of the age of your vehicle.

And in cold weather, it's more likely to happen as you'll be dialling up the heater to battle the sub-zero conditions.

Having a set of jump start cables or jump leads in the car will help you get going again if a friendly passerby is willing to let you hook up to their healthier battery.

This is an all-year-round essential and there are national standards for first aid provision within motor vehicles, devised by the British Standards Institution.

A small first aid kit should include the following items:

Again, carrying these in other European countries is a legal necessity but that's not the case in the UK.

You might need to drag them out of the boot to alert other drivers or breakdown providers that you need some help.

Having two means you can place one in front of your car and one behind in the case of get stuck in snow on any road that isn't a motorway.

The signs should be at least 45 metres - 147 feet - behind the vehicle, and it's suggested to buy a sturdy one that won't get blown down in blustery conditions.

Of course, if the conditions are extremely bad it is strongly recommended that you only attempt to drive if you really have to.