Do you know what you can tow? 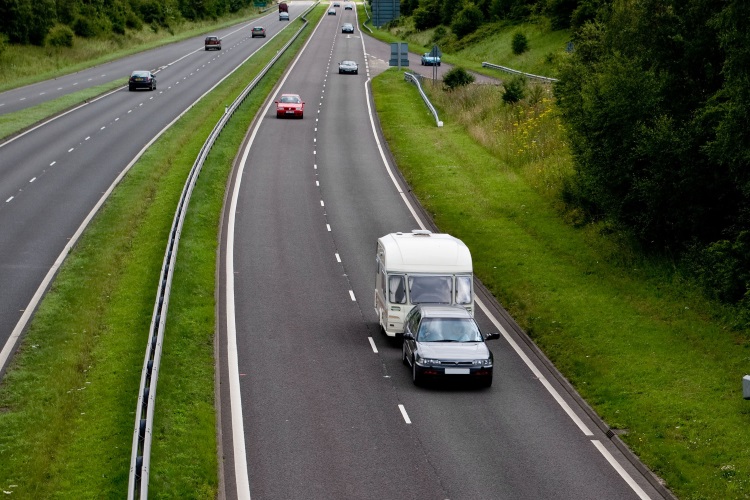 Knowing exactly what is included on your licence and how much you can legally tow is hugely important. Not only to stay safe, but to avoid risking a fine of as much as £1,000, and three to six points on your licence!

Drivers who passed their test after January 1, 1997 have a B licence which imposes tighter restrictions than the B+E licence which was previously issued. Figures from the DVLA show that more than five million drivers have passed their test since the beginning of 1997. Of those, just 1.2 per cent have passed a further test to upgrade to a B+E licence.

Without passing the B+E test, B licence holders are limited to towing a combined Maximum Authorised Mass (MAM) of car and trailer of 4.25 tonnes if the trailer has a MAM of 750kg or less, or a total of 3.5 tonnes if the trailer's MAM is more than 750kg. In practice, this means a younger driver towing a family caravan behind a mid-sized 4x4 may well be breaking the law.

Luke Bowdidge, manager of Trailer Training UK, routinely sees drivers who have discovered they don't have the right licence for their car and trailer. "Quite often the first time drivers are made aware is when things go wrong on the road, or at a roadside police check," he said.

Despite the potential to be prosecuted for driving without a valid licence, Bowdidge believes the difference between a B and a B+E licence is not widely understood. "It's not well publicised, so a huge part of our job is educating and informing the private and public sectors of the legal requirements."

Martin Spencer, technical manager at the Caravan Club and chair of the Society of Motor Manufacturers and Traders' Light Trailer Committee, agrees with Bowdidge. "It seems likely there are drivers who are towing beyond the limits of their licence, but what we don't know is how many," he said. "The fear is it could be a significant number."

Although exact figures are hard to come by, Spencer's opposite numbers at The Camping and Caravanning Club routinely see drivers unsure as to what they can and can't tow. Paul Jones, the club's marketing and communications director, said: "We run Towing Experience initiatives at the major industry shows, and find that there are still a number of caravanners who don’t understand which categories they need on their licence. Some visitors are not aware that there is any restriction on what they can tow, while others think they’re not allowed to tow anything at all.

Partly because of the efforts of both major caravanning clubs, Spencer sees confusion over licence restrictions as a greater problem in other sectors of the towing public. "Caravanners tend to be well engaged with organisations like ourselves, and with other sources of advice and information such as newsstand magazines and popular websites," he said.

"There are much greater risks of poorly informed drivers being unaware which combinations they are permitted to drive in other towing sectors – horsebox towing, activity holiday companies, landscape gardeners and small garages to name just four. All tend to have a higher proportion of younger drivers and a need to use larger vehicles."

As drivers with a B licence make up an ever-greater proportion of the driving public, the need to make the licence restrictions more widely understood is growing. Spencer argues that trailer, horsebox, and caravan dealers have a part to play. He told us: "Trailer retailers have a duty of care to make sure anyone in the right age group is asked if they have a B or a B+E licence, and to explain to B licence holders that they may need to take a further test." Caravan insurers are also in a position to alert drivers to the rules, but none of the three insurers we contacted (Caravan Guard, The Caravan Club and Club Care) currently ask younger drivers whether they have passed the B+E test when preparing a quotation.

Some drivers can avoid the need for a test completely by choosing their car and trailer carefully. "It’s entirely possible to choose a practical, spacious caravan and a suitable tow car which doesn’t need a B+E licence," said Spencer.

Nonetheless, demand for the B+E test is growing. Just over 5,000 drivers passed in 2007. In 2013, the figure was close to 12,000, and the pass rate has improved from 58 per cent in 2007/08 to 68 per cent in 2013/14. The cost of the test is £115 on a weekday, and £141 during evenings, weekends and bank holidays. That's small change compared with the price of a new caravan or horsebox, although most drivers will also need to pay for some driver training to make sure their towing is up to the required standard.

Even so, taking some instruction and a test with a high pass rate has to be a more appealing prospect than licence points and a hefty fine.

Not knowing is not an excuse, however, the situation could be helped by including ‘towing’ in driving lessons up and down the country. Not only will this highlight exactly what your licence will allow you to legally tow, but it will mean you’re a more confident and safer driver when towing for the first time.