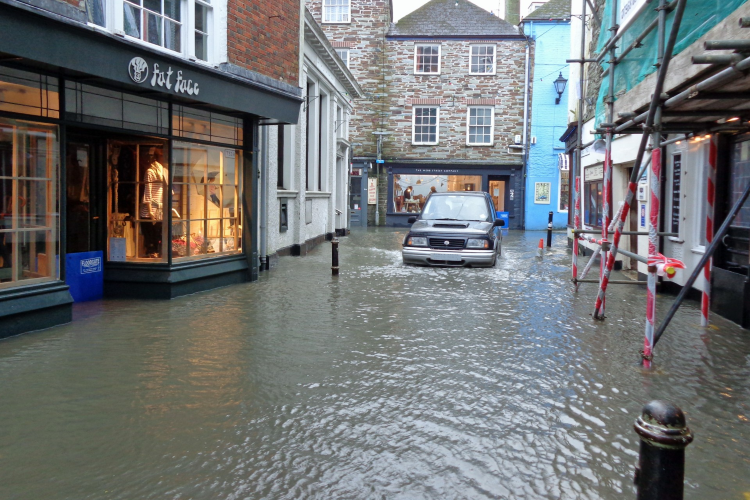 Whilst is best to avoid floodwater wherever possible, sometimes you have no other option but to drive through it. The below guidelines aim to reduce the risk of accident or injury.

Dreary weather is likely to result in more risky driving conditions. Wet roads mean that stopping distances are shortened, but the recent deluge is also likely to cause some localised flooding.

If you do encounter small floods on your journey, it's important to approach them safely. Just remember that turning around and finding a different route is a better option than being stranded on the roof of your car for hours, or worse, being one of the flood-related fatalities that occur every year.

Modern cars are quite capable in extreme weather, but they remain especially vulnerable to water. Both the electrical system and the engine are particularly susceptible to water damage. And that's before you take into account the immediate danger of fast-moving floodwater, which is surprisingly capable of washing a car downstream.

What should I do if I encounter a flood?

The best advice is "avoid". If you can find a solution that doesn't involve driving through floodwater, you minimise the risk to both you and your car. It's almost always worth turning around and finding another route if a road is flooded – you'll regret ruining your car for the sake of a few minutes.

You should definitely avoid driving through more than six inches of standing water, or more than four inches of moving water. Suitable footwear might allow you to gauge the depth of the flood by yourself, but a less charitable approach is to park up and observe motorists more foolhardy than yourself. See how another car gets on, and then proceed with caution (or call the emergency services if applicable).

If you decide to go through, stay on the crown of the road where possible and crawl through the water very slowly in first gear. Keep the engine revs up (by slipping the clutch if necessary) to avoid water entering the exhaust pipe. Also avoid the temptation to make a quick exit, as going at speed can push water into the engine.

Even drivers of large 4x4s should take care. Experts at Land Rover advise entering the water slowly (about 1-2mph), before accelerating to about 3-4mph. This creates a bow wave in front of the vehicle, which will create a depression in the engine bay and keep the air intake clear of water. However, this technique won't work with old, beam-axled 4x4s, as the water tends to hit the front axle beam and squirt straight into the engine bay.

Avoid going too fast into even quite shallow puddles as that can lead to aquaplaning, where the front tyres will no longer steer the car and you lose control. It is also inconsiderate and illegal to soak pedestrians.

When you emerge from the water, dry the brakes by using them gently, and if there were leaves in the water, check the radiator for blockages.

Another thing to watch out for is the lunatics coming the other way. You might be observing all the best advice, but big 4x4s or trucks racing though in the opposite direction can create such bow waves they drown your car.

If the worst happens and your car stops, leave the bonnet closed to avoid any further water ingress, climb out, lock the car and wade to dry land. In direst emergencies, you could try winding the car out by operating the starter in first or reverse gear but few starter motors will stand that sort of punishment so don't rely on it.

More than half (54 per cent) of UK drivers would endanger themselves and their vehicles by driving through moving flood water, according to a joint Environment Agency and AA survey.

The research of 21,165 AA members also revealed that more than a quarter (27 per cent) of respondents would drive through moving flood water deeper than 30cm, which is enough to move a car. The Environment Agency and the AA strongly advise against entering flood water that is moving or more than 10cm deep.

According to the AA, a third of flood-related deaths involve a vehicle because drivers take unnecessary risks. Last year, it rescued almost 9,000 vehicles that had driven through or were stuck in flood water, with an estimated insurance bill of more than £34 million.

Whether you’re in a 4x4 or a small hatchback, driving through floodwater should be attempted with caution – if possible, it should be avoided at all costs, and an alternative route should be taken instead.