Lethal faults are more likely in lorries from abroad. 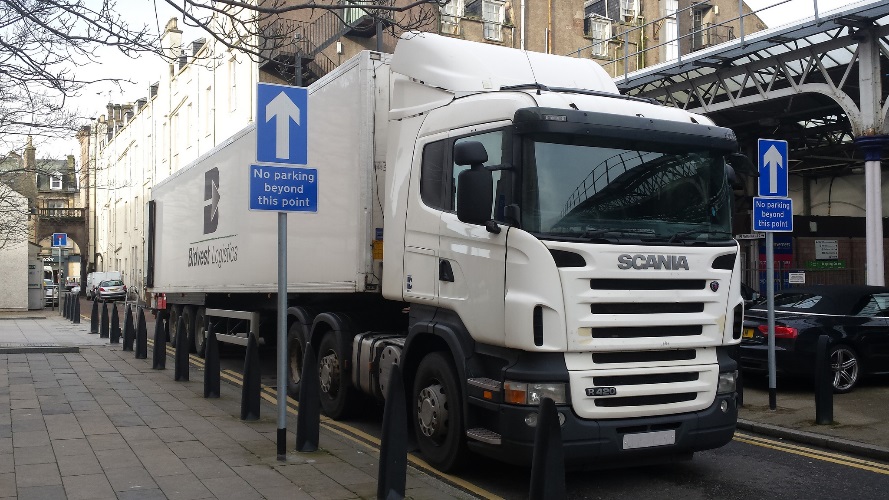 One in ten vehicles from overseas that were stopped in UK last year had a mechanical problem. Defects included faulty brakes and faulty steering, making them a dangerous addition to our roads.

More than one in ten lorries stopped by driving safety officers over the last year had dangerous mechanical defects, including faulty brakes or steering.

Roadside officers from the Driver & Vehicle Standards Agency randomly stopped more than 6,000 vehicles as part of an annual compliance check.

But while 11 per cent of British lorries were ‘mechanically defective’, the figure rises to 12.5 per cent for foreign lorries.

The DVSA said: ‘As in most previous years non GB vehicles and drivers have higher rates of prohibition and serious offence rates than GB drivers and vehicles’.

The findings prompted one motoring campaigner to describe these lorries as a ‘tragedy waiting to happen.’

Faulty brakes was the most common problem identified, according to the DVSA.

Other common problems include faults with axles, wheels, tyres and suspension, defects in the chassis and steering.

All these faults were serious enough to warrant being banned from the road, according to the DVSA.

It said the number of lorries with serious defects has not increased in recent years.

But it revealed that the proportion with the most serious issues warranting an immediate ban such as faulty brakes and steering has risen to just under a third.

In these situations drivers are ordered to take their vehicle to the nearest pound to be fixed before they are allowed back on the roads.

In less serious cases drivers are given a certain number of days to fix their vehicle.

The DVSA said brake defects accounted for 28 per cent of the mechanical problems identified in British lorries, and 33 per cent in foreign lorries.

It said vehicles checked in Hampshire and surrounding areas have ‘significantly higher rates of mechanical defect’ than those checked in other parts of the UK.

The DVSA urged lorry drivers to check their brakes following the findings.

But Edmund King, president of the AA, said: ‘If you have a 44 tonne truck with faulty brakes or steering that really is a tragedy waiting to happen.

‘This provides more evidence that foreign lorries are not up to same standards as GB lorries. This poses an extra danger - particularly on motorways around the ports.’

He added: ‘Because of the sheer size and weight of these trucks the consequences of them failing to brake and ploughing into traffic are more dire. I worry that we have so many unroadworthy mega trucks on some our motorways.’

Gareth Llewellyn, the DVSA’s chief executive, said: ‘Brakes that don’t work, particularly in something with the weight and power of a lorry, can devastate families and their communities.

‘So it’s disappointing that a minority of operators are still not performing effective checks. If we catch you with brakes that don’t work we will take your vehicles off the road to ensure the safety of the travelling public.’

The size of lorries makes the safety faults even more dangerous, as the consequences of the driver losing control are arguably more serious. Ensuring all vehicles are safe to be on UK roads should be a top priority.