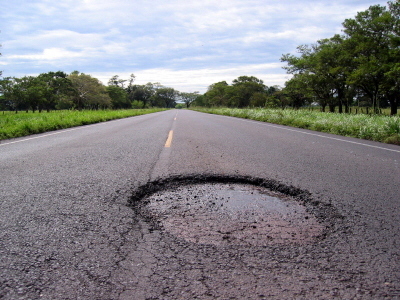 Drivers are more than 50% more likely to have a breakdown caused by potholes, new figures have revealed.

Motorists are now around 2.5 times more likely to suffer pothole-related breakdowns than 12 years ago. In the last year, the RAC dealt with 14,220 breakdowns where the “overwhelming likelihood” was that potholes were the cause.

That means pothole damage accounted for 1.5 per cent of all RAC call-outs in the period, the second highest percentage ever recorded for call outs of this type since the RAC started analysing pothole data in 2006. The highest figure was 1.6 per cent, which was seen in 2015 and 2017.

This means that, while the number of pothole-related breakdowns – such as damaged shock absorbers, broken suspension springs and distorted wheels – attended by RAC patrols in the third quarter of the year decreased year-on-year to 1,746, the figure for the last 12 months has remained high.

The RAC’s Pothole Index – a long-term indicator of the health of the UK’s roads – shows the likelihood of breaking down after hitting a pothole is higher than it was last year, although still not as bad as the worst point in 2010.

David Bizley, chief engineer at the RAC, commented: “There is little doubt local road conditions in many parts of the country are substandard and have been so for quite some time.

“Data from this quarter’s RAC Pothole Index supports this, showing there has been a steady deterioration in road condition over the last 18 months, with the latest quarter not showing a significant improvement.

“We need a 10-year plan with ring-fenced funding that will eliminate the backlog of preventative maintenance that will stop the plague of potholes appearing every time there is bad weather.”

The data shows a substantial nationwide issue caused by potholes which is affecting an increasing number of motorists. Although addressing this issue would be an expensive feat for local authorities, it would be crucial in reducing the number of breakdowns caused by potholes.