Tailgating really doesn’t get you to your destination faster, Scientists prove it causes traffic jams that could double your commute time. 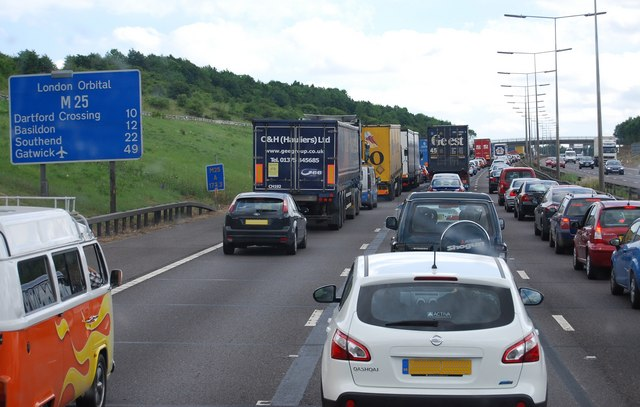 Traffic jams are one of the biggest inconveniences of modern life and a new study suggests that tailgating could be causing them.

Keeping an equal distance between the car in front and behind could help rid the world of 'phantom' snarl ups brought on by bad driving habits.

According to research from MIT's Computer Science and Artificial Intelligence Laboratory (CSAIL), by staying roughly half way between the car behind as well as the car ahead, there will be a more constant flow of traffic.

Humans and existing automated cruise controls work by measuring the distance to the car in front and maintaining a constant distance.

CSAIL's research suggests that their 'bilateral control' method could be easily implemented.

Most of today's systems only have front sensors, but adding sensors to both the front and rear bumpers could make a huge difference to commute times.

Traffic would get noticeably smoother, even if just a small percentage of all cars were outfitted with such systems, experts say.

MIT professor Berthold Horn, who co-authored a study with Dr Liang Wang, said: 'We humans tend to view the world in terms of what's ahead of us, both literally and conceptually, so it might seem counter-intuitive to look backwards.

'But driving like this could have a dramatic effect in reducing travel time and fuel consumption without having to build more roads or make other changes to infrastructure.

'Our work shows that, if drivers all keep an equal distance between the cars on either side of them, such "perturbations" would disappear as they travel down a line of traffic, rather than amplify to create a traffic jam.'

Phantom traffic jams are often a spontaneous occurrence, caused by the changing speeds of individual cars and the resulting knock-on effect.

Sudden changes in speed, such as sharp braking, has been shown to cause delays and traffic jams.

A previously proposed way of resolving the issue was to electronically connect vehicles together and coordinate their distances between each other.

The study team took inspiration from an unexpected source when looking at how best to resolve the issue of bunching on the roads.

A starling murmuration is a group of thousands of birds which move and flow in perfect unison.

The birds are inches apart and yet navigate the skies as one enormous fluid body.

The birds use three zones 360 degrees around them to ensure all of them are correctly lined up.

Bad driving habits such as tailgating can increase your journey time, so it’s worth paying extra attention behind the wheel to drive politely and safely, and avoiding tailgating the car in front.