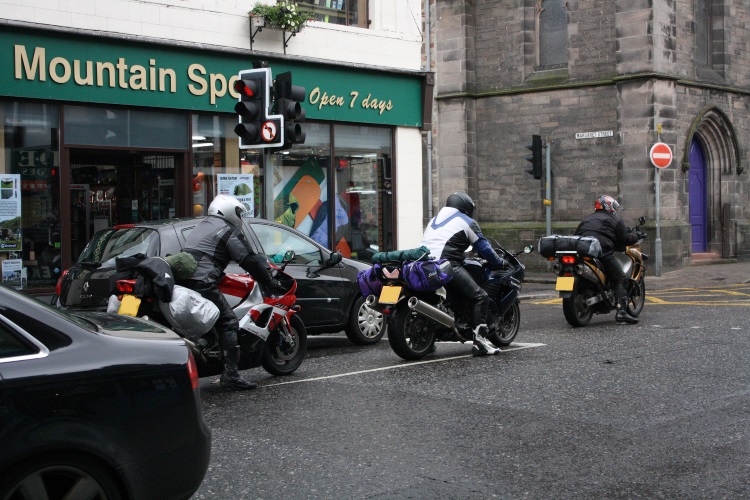 Lane filtering, or lane ‘splitting’ as it’s called in the USA, has been legalised in California, despite the associated risks to the motorist. Lane filtering is the slightly grating practice of riding a bicycle or motorbike between roadway lanes of vehicles driving in the same direction. It also, perhaps more commonly, refers to overtaking slow or stopped vehicles by travelling between lanes. This allows the rider to cheat traffic jams, or sneak their way to the front of the traffic lights.

The American Motorcyclist Association places significant emphasis on motorcycle operator and passenger safety. On every type of public roadway, motorcyclists encounter challenges from other roadway users and are constantly vigilant to unsafe conditions around them.

Perhaps one of the most dangerous situations for any on-highway motorcyclist is being caught in congested traffic, where stop-and-go vehicles, distracted and inattentive vehicle operators, and environmental conditions pose an increased risk of physical contact with another vehicle or hazard. Even minor contact under such conditions can be disastrous for motorcyclists.

The Hurt Report1, the most comprehensive motorcycle crash causation study to date, noted that, “Moderate or heavy traffic was the situation at 59.2 percent of the accidents [studied]. ”Reducing a motorcyclist’s exposure to vehicles that are frequently accelerating and decelerating on congested roadways can be one way to reduce rear-end collisions for those most vulnerable in traffic.

In many countries (excluding the United States), lane splitting and filtering are normal practices for motorcyclists. Particularly in the highly urbanized areas of Europe and Asia, motorcycle and scooter operators are expected to pass between conventional vehicles and filter (advance) to the front of the group.

Recent events in the United States have renewed motorcyclists’ interest in lane splitting. Therefore, the AMA has prepared this position statement to aid in understanding this issue and assist motorcyclists in deciding whether to support efforts to permit lane splitting in their states.

One of the recommendations in the National Agenda for Motorcycle Safety (NAMS)3 is: “Study the safety implications of lane splitting.” In support of this recommendation, the report states:

“A motorcycle’s narrow width can allow it to pass between lanes of stopped or slow-moving cars on roadways where the lanes are wide enough to offer an adequate gap. This option can provide an escape route for motorcyclists who would otherwise be trapped or struck from behind. There is evidence (Hurt, 1981) that traveling between lanes of stopped or slow-moving cars (i.e., lane splitting) on multiple-lane roads (such as interstate highways) slightly reduces crash frequency compared with staying within the lane and moving with other traffic.

“Although lane splitting is allowed in just a few areas of the United States, notably California, it appears to be worthy of further study because it offers a means of reducing congestion in addition to possible safety benefits. It is widely used in many other countries.”

For decades, California has been the only state to permit lane splitting. While not specifically permitted or prohibited in the California Vehicle Code, lane splitting has been condoned by the California Highway Patrol. In early 2013, the CHP published lane-splitting guidelines5 for the first time. While the guidelines do not carry the force of law and have since been removed from public circulation, they provide clear indicators under which a motorcyclist might be cited for unsafe or imprudent behaviour.

Legislatively, there has been state-level activity on lane splitting, although to date no bill has been enacted.

Passing legislation to permit lane splitting may be the easiest part of the process. Significant effort would subsequently be required to educate the law enforcement community, officials and administrators within state departments of transportation and public safety, prosecutors, the judiciary and the general motoring public on the benefits to those groups and motorcyclists to make lane splitting safe for everyone. Using public service announcements and campaigns, traditional broadcast and print media, social media, and other forms of information sharing could assist in highlighting the safety, congestion reduction, and other benefits of lane splitting.

Taking into consideration that the vast majority of the motoring public does not ride motorcycles, we are certain non-motorcyclists do not understand the risks and the benefits of lane splitting to the riding community. Motorists in California being the exception, we believe it would take many years of experience and substantial and ongoing public information campaigns to educate non-motorcyclists to accept motorcyclists passing them between lanes of traffic.

The AMA endorses rider responsibility and actions that make roadways safer for motorcyclists. While research and evidence suggest that lane splitting may reduce a motorcyclist’s risk exposure somewhat, we are cautious to issue a blanket endorsement supporting the practice. In particular, experience has taught us that the legislative process and the implementation of new laws are fraught with uncertainty. A straightforward lane splitting bill may easily be amended with provisions that the AMA and the motorcycling community would find unacceptable. Provisions such as mandatory helmet use in an adult- choice state or mandatory minimum medical insurance coverage provisions would quickly poison an otherwise well-intentioned effort.

Even with the best intentions and organization, inappropriate behaviour by motorcyclists can quickly garner a large negative response from the motoring public. With the easy availability of video systems and the Internet, a few postings of public roadway stunting, such as speeding past motorists stuck in traffic, could sour a legitimate campaign to approve lane splitting in a state.

While the AMA has long advocated responsible riding practices and does not condone any behaviour that violates the rules of the road, we caution that the future of lane splitting in any state could be derailed by the actions of a few irresponsible motorcyclists. Advocates of lane splitting should be prepared to counter any negative responses they receive from legislators and those responsible for implementing lane splitting laws.

So, is lane filtering safe under certain circumstances, or should it be stamped out completely? For many bikers it’s a given that filtering in slow traffic is the correct etiquette on the road, but considering this is only legal in California, is it really worth the risk?