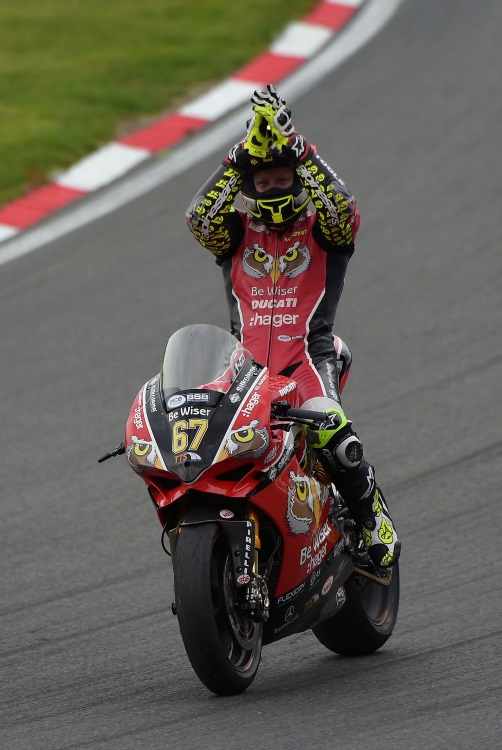 The Be Wiser Ducati British Superbike Championship Team heads north of the border this weekend full of confidence for round four of the 2016 MCE British Superbike Championship to be held at the Knockhill racing circuit in Fife.
Hot on the heels of Shane ‘Shakey’ Byrne taking his first win of the season with a superb victory in the second race held at his local Brands Hatch circuit last month, that has put him to within three points of the championship lead arriving in Scotland.
Aboard the factory-supported Be Wiser Ducati Panigale R, the 39-year-old Londoner will be hoping to continue that momentum at a track which has seen many of his successes in recent times, and which included a double victory for Paul Bird’s team at the corresponding event last season.
Indeed, the four-times MCE BSB champion has an envious record at Knockhill, where he can boast an incredible six wins and two second places in his last eight races around the twisty track which overlooks the Firth of Forth. In total, Shakey has ten wins and a further six podium places there and with a successful recent test around the track too, he’s raring to go.
The Cumbria-based PBM team scored a double 1-2 last year with local ace Stuart Easton trailing Shakey home in both races so Glenn Irwin knows he has a tough task if he’s to repeat that. The 26-year-old Ulsterman, however, is relishing the task and has performed admirably on his Be Wiser Ducati Panigale R so far.
In his rookie season in MCE BSB, the Carrickfergus rider has scored points in every race bar one when a technical problem sidelined him at Brands Hatch and he too enjoyed a successful test at Knockhill recently. Irwin won a race at Knockhill last year in the British Supersport Championship as well as scoring a podium so he too knows what it’s like to sample success there.
Shane Byrne: “It's very important that we get to Knockhill with our feet firmly on the ground. We tested up there recently which will help, and we won our first race of the season last time out,  but keeping our heads down and pushing to the maximum is the only way we'll keep progressing. I've won six of the last seven races at Knockhill and another win or two would go down a treat although I'm sure that'll be as difficult as always, but after a nice relaxing family holiday, I'm ready to go and try!”
Glenn Irwin: “The team have worked hard again at our recent test at Snetterton. We found yet another direction to go in with the bike that will give us another option at Knockhill other than the set up we achieved during testing there. I enjoy the circuit and it's as close to home as I can get. I’ve worked hard in between times and it’s been a long time since the last race so I can’t wait to get going again.”
MCE British Superbike Championship Standings (after three rounds)
1 L Haslam 93pts
2 S Byrne 90
3 C Iddon 86
4 R Cooper 74
5 M Laverty 66
6 J O’Halloran 62
14 G Irwin 20