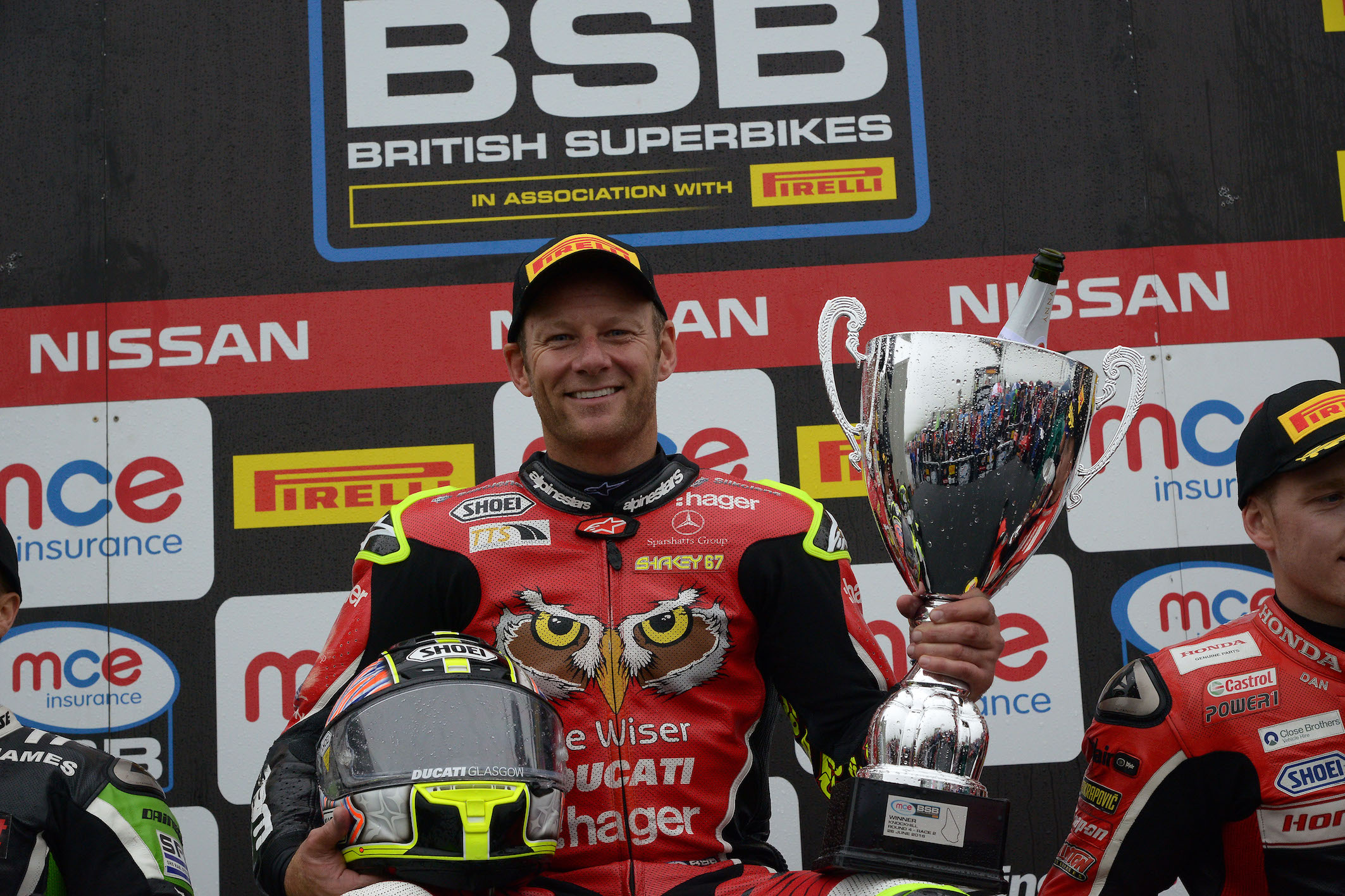 Be Wiser Ducati rider Shane ‘Shakey’ Byrne overcame the disappointment of a first race crash to secure his second victory of the season with a superb ride in difficult conditions in round four of the 2016 MCE British Superbike Championship at Knockhill in Scotland today.

Aboard the factory-supported Be Wiser Ducati Panigale R, the 39-year-old Londoner bounced back from a crash in the morning warm up session to line up on pole position for the first time this season but the opening race wasn’t one to remember. The four-times MCE BSB champion once again made a sluggish start but worse was to follow when he crashed out on lap four at the Hairpin and although he was able to remount, regulations didn’t allow for him to continue in the race so he had to retire.

It was better news for team-mate Glenn Irwin who had qualified the Be Wiser Ducati in a career-best fifth position and was hopeful of a good race. The 26 year old from Carrickfergus didn’t make the best of starts, however, but continued his steep learning curve in his rookie season to end up in 11th place to secure his second best finish of the year.

Race two saw contrasting fortunes once again for Paul Bird’s Penrith-based team with Shakey starting from row four as the weather took a turn for the worse. In the same extreme wet conditions which prevailed during Datatag Extreme Qualifying yesterday, it played into Byrne’s hands as he put in a superb performance. Running inside the top five as early as the first lap, he was soon locked in battle with Leon Haslam for the race win. The duo swapped positions on numerous occasions but with five laps to go, Byrne reclaimed the lead and a series of quick laps enabled him to break the tow from the rest of the field to take his second win of the season.

It represented his 70th career MCE BSB race victory and an unprecedented 11th at Knockhill to maintain his second place in the standings, just 13 points behind leader Leon Haslam.

Irwin, meanwhile, started the second encounter from the third row of the grid and looked on course to secure his best finish of the year as he ran in a strong seventh place early on. However, on the ninth lap, a clash with James Ellison at the Hairpin saw him slide off, bringing an early end to what looked to be a promising race.

“The first race was disappointing and to have two crashes in a weekend isn’t like me so I was keen to make amends in the second race. Just before the start of race two, my mechanic reminded me it was a 30-lap race and there was plenty of time and opportunities to get to the front but it actually happened quite quickly. Leon was brave into the first corner but he started to have a few moments so that was when I upped my game. I felt really strong and with five laps to go, I got my head down and really pushed hard. I badly wanted to win the second race so to come back from the first race crash and turn things round in the way that I did is great. Knockhill’s been a good circuit to me over the years so a big thanks to the fans for staying out in the weather and also to the whole PBM Be Wiser Ducati team who again did a terrific job.”

“We’ve made great progress with the Be Wiser Ducati this weekend and the team has done a brilliant job. We did OK during qualifying and I was confident going into today’s two races Glenn Irwinwhich saw me finish within eight seconds of the winner in race one. I was hoping for a better result in race two despite it being wet but then I got caught up with another rider at the Hairpin and crashed out. I was angry as it wasn’t my fault but he didn’t mean to do it, it was just one of those racing incidents, but I came off worst. We’ll bounce back at Snetterton and thanks to the team once again.”

“It’s been a mixed day today, not just with the weather but also with our results. Race one was very disappointing for Shakey as he slid off, possibly whilst trying that little bit too hard to try to close the gap to the leaders. Glenn suffered at the start too and dropped back and although he didn’t move forward as much as what he would have liked, he found a good rhythm and scored some solid points. For the second race, Shakey made a great start and he bided his time before making some good moves forward. He had strong pace and although he had a few scary moments, it’s great to come back from zero points with 25 and another win. On this occasion, it was Glenn’s turn to have bad luck and another rider’s mistake saw him crash out. It’s frustrating as he had similar pace to Shakey and looked on course for a top six finish.”