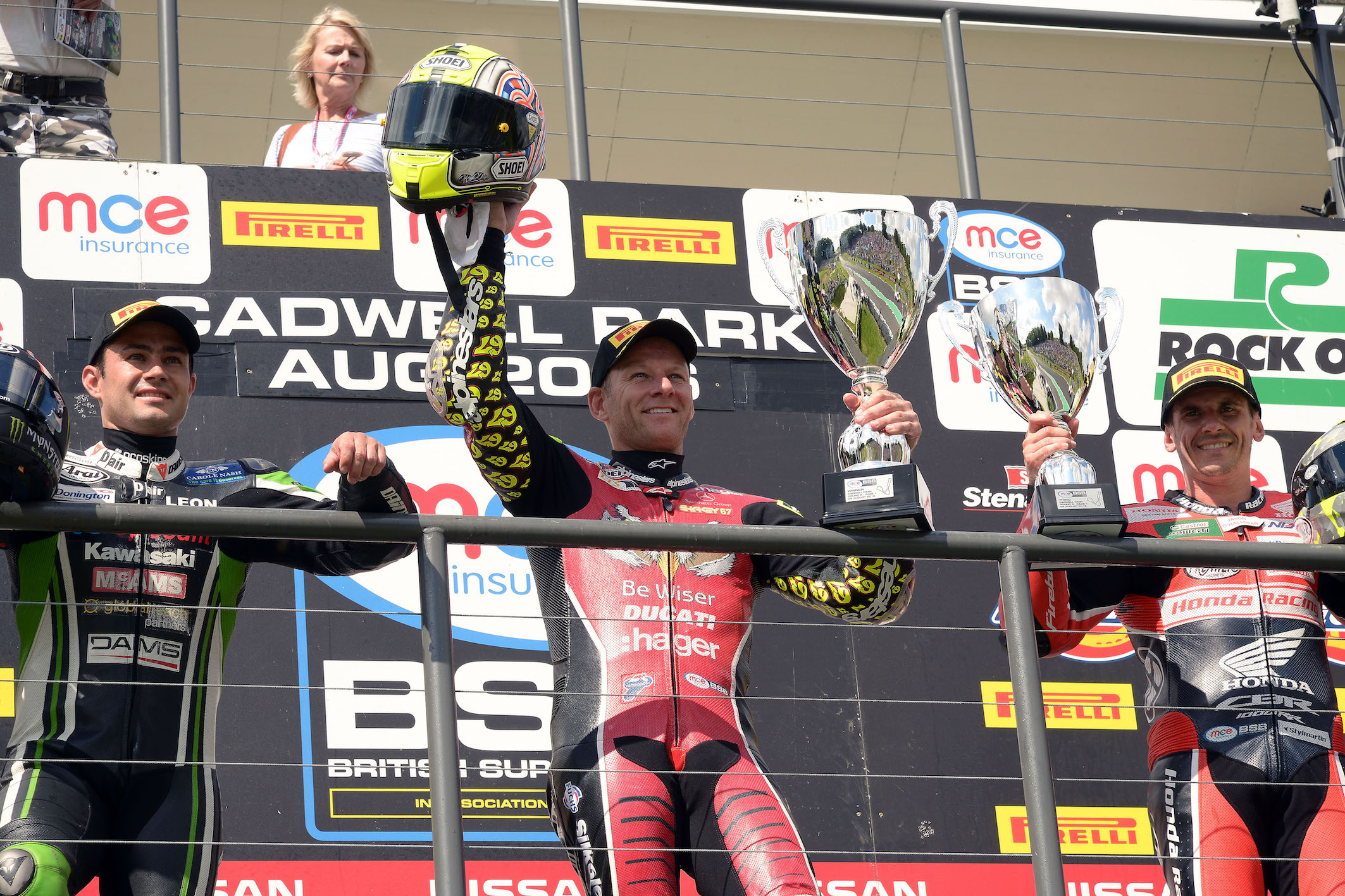 Be Wiser Ducati Racing Team rider Shane ‘Shakey’ Byrne continued his winning ways at round eight of the MCE British Superbike Championship with another superb victory in the opening race at Cadwell Park in Lincolnshire today.

The result confirmed the 39-year-old Londoner’s place in the season-ending Showdown as he strives for title number five before adding a battling third place in the day’s second race to his successes aboard the factory-backed Be Wiser Ducati Panigale R for Paul Bird’s Penrith-based team.

In front of the biggest crowd of the season and in glorious conditions, the first 18-lap race saw Byrne go head to head with main title rival Leon Haslam from the front row of the grid. Shakey grabbed the lead on lap four when Haslam ran wide but he was relegated to third a couple of laps later when a missed gear allowed Haslam and Jason O’Halloran past.

With three laps to go, Shakey regained second place before finding the narrowest of gaps to pass Haslam at the Gooseneck on the final lap which saw him hang on to take his seventh win of the season and with it, career win number 75, although only his second at Cadwell Park.

The second race later in the day saw the safety car deployed after a first lap crash before racing resumed on lap four with Shakey in the lead. He dropped to third but a titanic battle ensued with Byrne shadowing Haslam and O’Halloran but he couldn’t find a way past so had to settle for third place and another vital Podium Point for the Showdown.

Team-mate Glenn Irwin started the first race from 11th on the grid and although he slipped back to 13th in the early stages, he soon found his rhythm and once he started moving forward on the fourth lap, it was a trend that continued for the rest of the race. Indeed, the Carrickfergus rider picked off the riders in front of him gradually and he finished the race in an excellent fifth place.

The 26-year-old started the second race from seventh place on the grid and although he dropped back in the first few laps, he again started to move forward as the laps counted down. Up to ninth on lap eight, followed by another overtaking manoeuvre on lap 12 which moved him up to seventh and this was where he finished for his second solid points haul of the day.

Shane Byrne: “I knew I had to get by Leon before the bottom of the Mountain on the final lap of the first race but he was strong into Park Corner which stopped me from having a go there. I’d seen him run wide into Chris Curve so I went in smooth and maintained my momentum to just get through before the Gooseneck. I managed to block any attempts and I have to say a big thanks to the Be Wiser Ducati team as they gave me a great bike. I tried really hard in the second race but the bike seemed to be moving around more than in the first and when I checked the tyre afterwards, it was considerably more worn than the two riders in front of me. I’m not sure why as we didn’t change the bike so we’ll need to look into it. I really like Cadwell Park so I’ve got to be happy coming away with a first and a third and clinching my place in the Showdown.”

Glenn Irwin: “Race one was good and race two should have been even better but I made a terrible start and gave myself more work to do. I was part of a battle for fourth but I was at the back of it when I should have been at the front of it. I’d saved my tyres and had good pace at the end but it was so difficult to pass Bridewell and Linfoot and I wasn’t prepared to make a lunge. Before race one I said to the team, I’d take two top eight finishes today and I took fifth and seventh but I’m not happy. It’s good not to be happy so I’m already looking forward to the next round.”

Phil Borley, Technical Director: “We’re happy enough with the results today. We had a fantastic first race with Shakey winning and Glenn coming through to fifth so we were hoping for a similar outcome in the second one. It didn’t quite go our way with Shakey having some slight problems with his rear tyre towards the end of the race maybe because he couldn’t get the lines he wanted. It’s not our best circuit and we’ve only lost a couple of points to Leon so, overall, we’re fairly happy so will just keep pushing and hope for more wins at the next round before the Showdown.”

Meanwhile at Rockingham for round eight of the BTCC-supporting MSA F4 British Championship, Fortec Motorsport driver Frank Bird was going in search of points for a fourth successive meeting in the Be Wiser, Hager and Frank Bird Poultry-backed car.

Having celebrated his 17th birthday last week, Frank was out of luck despite a promising qualifying which saw him in 11th place but 14th in race one was followed by a DNF in race two and a 17th place in the weekend’s third outing saw him fail to add to the points he scored recently at Croft, Snetterton and Knockhill.

The penultimate round takes place at Silverstone over the weekend of September 17/18th whereby Frank will be looking to get back to his previous form.