Cadwell Calling For Be Wiser Ducati 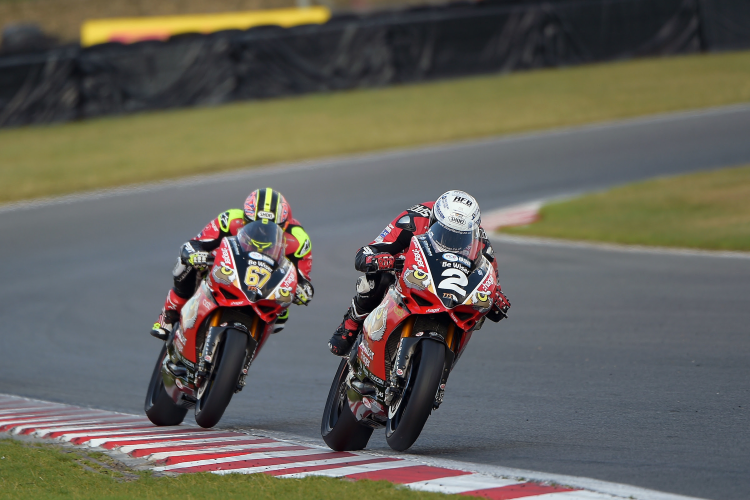 It was there at his local Kent circuit that Shane Byrne claimed a superb double victory aboard the factory-backed Ducati Panigale R to add to his other four wins this season to increase his lead at the top of the standings and put him in prime position to claim his place in the Showdown.

Shakey only needs a podium in either of the two races to guarantee his place in the end of season and title deciding top six but the 39-year-old Londoner won’t be settling for anything other than adding to his record-breaking 74 career BSB wins as he strives for title number five.

But the Lincolnshire track, which is expected to see the biggest crowd of the season, hasn’t been a happy hunting ground for Byrne over the years and you have to go back to 2003 since his one and only win there, although he can boast ten podiums during his career.

Also looking to impress for Paul Bird’s Penrith-based team once again is Ulsterman Glenn Irwin who continues his great form in his rookie season aboard the Be Wiser Ducati Panigale R.

The 26-year-old from Carrickfergus claimed his maiden BSB podium at Thruxton last month and backed it up with a fourth place finish at Brands Hatch last time out meaning he’s one of a number of riders who know a pair of solid results at Cadwell Park will significantly boost his outside hopes of a Showdown place. A former Supersport race winner at the track, Irwin hopes to be challenging up the order once more.

Shane Byrne: “Cadwell Park up next for us, it's an exciting, narrow and difficult track to go really fast at and it’s especially hard to overtake. We recently had back to back, two-hour evening tests there so we should start somewhere near where we need to be. A lot of our rivals spent two whole days there last week but we know what we did and we know what we need to do to improve. I'm hoping to cement my place in the Showdown this weekend and keep up the strong results which the Be Wiser PBM Ducati team want and deserve.”

Glenn Irwin: “I am looking forward to Cadwell Park this weekend more than ever. We had a test there and although I wasn't as quick as Shakey, it's a track that is unique and takes a little more to learn. My crew tried a range of settings which will stand us in good stead this weekend. We have seen what our rivals have done over two full days of glorious sunshine, and I am not too far away. I’ve got a couple of ideas to put into place in FP1 to continue the learning process and get further up to speed and hope we can challenge inside the top six again.”

Meanwhile, at Rockingham this weekend, Fortec Motorsport driver Frank Bird will be going in search of points for a fourth successive meeting in the BTCC-supporting MSA F4 British Championship.

Having celebrated his 17th birthday last week, Frank will be looking to add to the points scored recently at Croft, Snetterton and Knockhill in order to continue his great mid-season form in the Be Wiser, Hager and Frank Bird Poultry-backed car.