Double Win For Redding, Double Podium For Brookes At Donington 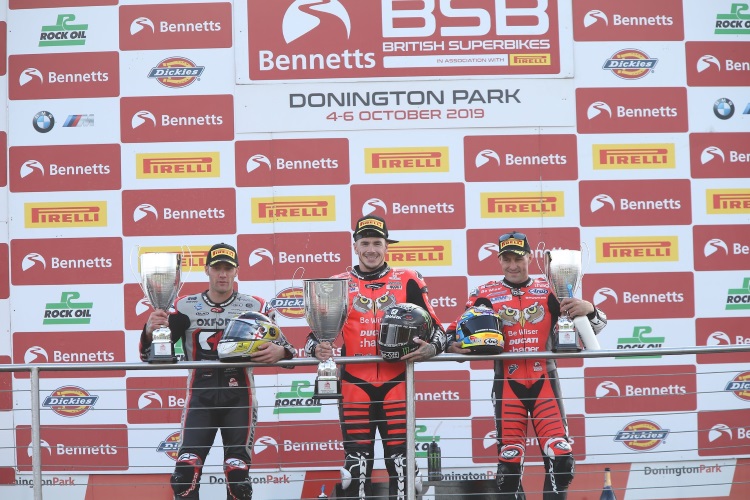 Fresh from his double victory at Assen two weeks ago, Be Wiser Ducati rider Scott Redding took up where he left off with another pair of victories at the penultimate round of the Bennetts British Superbike Championship at Donington Park today.

Having taken pole position aboard the factory-supported Be Wiser Ducati Panigale V4 R for the fifth time this season, the 26 year old from Gloucester romped to his 10th win of the season in the opening encounter before claiming win number 11 later in the afternoon to make him unbeaten in the title-deciding Showdown to lead the series by 28 points going into the final round.

Team-mate and title rival Josh Brookes maintained his title challenge with a double podium but despite his second and third place finishes, the 36-year-old Aussie lost vital ground to Redding but with the Brands Hatch GP track being one of his most successful, Brookes is determined to make amends at the final round.

Despite wet weather being forecast, there were dry and bright conditions for the first 20-lap race and the duo both made a great start to the race with Josh leading on the opening lap as Scott settled in behind him. Positions stayed the same until the third lap when former MotoGP rider Redding hit the front as Brookes got shuffled back to fourth

Redding took full advantage of the clear track and with a succession of quick laps, he opened up a three-second lead by half race distance. No sooner had he done so than spots of rain began to fall and he eased his pace but when the rain went away, he quickly got back into his stride and with the fastest lap of the race he pulled away again to take his tenth win of the season with 2015 BSB champion Brookes in third to claim the final podium position.

Redding started the second race from pole position once more with Brookes in fourth, but it was Brookes who grabbed the lead after making a brilliant start. The race was only three laps old when the safety car came out due to gravel being dragged onto the circuit but on lap six racing resumed whereby Redding immediately overtook Brookes. By half race distance, he had opened up a two-second lead, but Brookes put in a succession of fastest laps to close to within half a second to set up a nail-biting finish.

However, Redding was able to keep Brookes at bay to make it four wins from four starts in the Showdown and in doing so, claimed the Penrith-based team’s fifth 1-2 of the season.

Scott Redding: “I felt comfortable in race one, so I was able to manage everything quite well. I felt settled leading the race but when a few spots of rain began to fall, I eased off a bit as I didn’t want to get caught out. When it became clear the rain had stopped, I was able to set the fastest lap of the race and pull away again, so it worked out well in the end. The second race was tricky too as I had a problem with the gear-shifter which meant the bike was pushing me wide into the corners. Josh upped his pace too, which I knew he would, and the gap came down, so I was pleased to bring the bike home and get the double.”

Josh Brookes: “I made the ideal start to race one, but I knew immediately that something was wrong as I couldn’t find an apex and it was a bit confusing as to why the bike wasn’t working like it had done in qualifying. I lost a couple of places, but I managed to regroup and keep a good pace to come through to take a solid third. I improved to second in race two which I should be pleased with as many riders would give anything to be in that position but I’m smiling through gritted teeth as I don’t feel like I’m riding as well as I can. I don’t feel like I’m getting the best out of myself so I’m disappointed with the results but there are still 75 points available, so we’ll see what happens at the final round.”

Johnny Mowatt, Team Co-ordinator: “It’s been a great day for the team with both race wins and a 1-2 in the second race and all the plaudits today have to go to Scott for two superb performances. He showed in May how at home he felt around the Donington Park circuit and it’s been a similar story this weekend so with four wins from four starts in the Showdown, it’s clear he’s on top form at the moment and will take some stopping. He’s all too aware though that it isn’t over yet and, as a team, we know anything can still happen. Josh had two slightly tougher races and had to work hard in each to get onto the podium, but he achieved it on both occasions. His team made some changes to the bike in between the two races which you could see improved the package. It’s great to take another 1-2 and the aim now is to have more of the same at Brands Hatch and take the top two places in the championship.”

The final round of the series takes place at Brands Hatch on October 18/20.