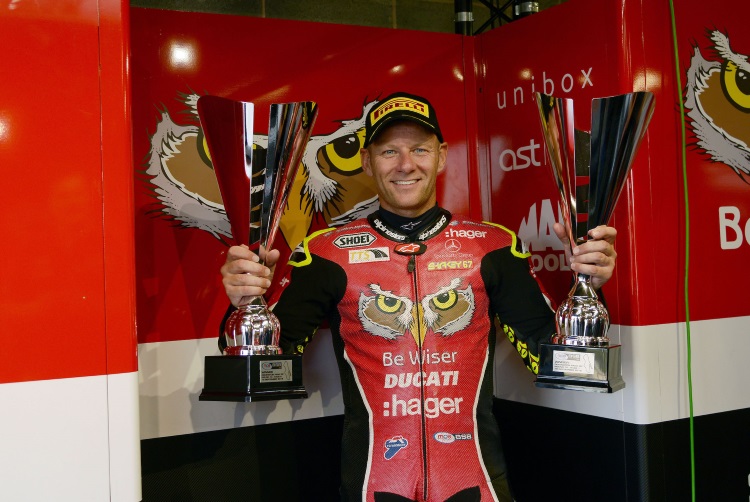 Shane ‘Shakey’ Byrne opened up a healthy 27-point lead in the race for the 2016 MCE British Superbike Championship at Donington Park today after an emphatic double victory around the 2.5-mile Grand Prix circuit.

Having qualified the factory-backed Be Wiser Ducati in second place for the opening 20-lap race, the 39-year-old Londoner took a commanding victory in both races to draw first blood in the title-deciding Showdown part of the season for Paul Bird’s Penrith-based team.

In glorious sunny conditions, the four-times champion completed the first lap of race one in third place after overhauling Christian Iddon and a lap later he was up to second. Wasting no time, Shakey then overtook arch rival Leon Haslam at the Esses and by half race distance, he began to stretch the gap.

Aided by a new lap record, his advantage went above half a second for the first time on lap 12 and he added to his advantage over the next few laps. At three-quarters race distance, his lead was up to 1.2s and he wasn’t to be denied his eighth win of the season, taking the chequered flag a dominant 7.2s clear of Haslam.

Starting from pole position for the second race later in the day, Byrne slotted into third place in the early stages behind the Kawasaki duo of Haslam and James Ellison but another new lap record saw him close in and on lap eight he moved up to second, overtaking Ellison at the Old Hairpin. However, a near coming together soon after at the Melbourne Loop with Haslam dropped him back to third.

Regrouping, he got back up into second place a lap later and then set about closing the gap to race leader Haslam. On the twelfth lap, he took the lead for the first time and moments later Haslam crashed out at Redgate, which gave Shakey a second lead over Dan Linfoot. He slowly pulled away from the Honda rider and despite a scare at Goddards on lap 17 he swept home for his 77th career win to seal a brilliant double and take firm control of the championship going into the penultimate round at Assen in a fortnight.

Team-mate Glenn Irwin lined up in 14th place for race once, ending the first lap a place further back in 15th. He was soon up to 12th but then lost time on lap nine when Billy McConnell crashed in front of him at the Melbourne Loop. He eventually found himself locked in battle with Jakub Smrz and Lee Jackson for 11th but ultimately had to give best to the two riders to end the race in 13th place.

The Carrickfergus rider started the second race from 13th which was where he completed the first lap. Overtaking opportunities were scarce but by half race distance he was up to 11th and part of a four-rider battle for ninth. Battling hard as always, the 26-year-old came home in tenth to ensure his weekend ended on a high note and with another top ten finish.

Shane Byrne: “My strategy for race one depended on what Leon’s tyre choice was as I know he’s very good at managing his tyre life and making the harder tyre work. Seeing him choose the SC1 harder tyre, I went for the softer option and decided I needed to get to the front as soon as I could and get into a rhythm so as not to hammer the tyre too much and lose time in the latter stages of the race. It all went to plan so big thanks to my crew chief Giovanni and the team for doing a great job. The increase in temperature was a big factor in today’s results and the weekend has been so good for us as I’m able to make the softer tyre last so it was a similar strategy for the second race. Once again, I knew I needed to get to the front as early as possible and although it took me a bit longer second time around, once I did, I kept my head down and maintained a sensible rhythm. I wasn’t 100% sure Leon had crashed out but I’m sure he’ll be back at the front at Assen so we’re not counting our chickens yet.”

Glenn Irwin: “After a few crashes recently, I’ve taken a few knocks and I really struggled today, especially with my shoulder. I didn’t have enough strength in race one to hold on and it would have been foolish to try and keep Jackson and Smrz behind me so I brought the bike home for a finish. Thanks to the circuit physio, I got out for race two and whilst it was difficult again physically, the team did a great job with the bike and it was working really well. I made a bad start but the tyres were good and I got a top ten finish. Today’s results aren’t what I’m capable of and I feel like I’ve let the team down but I’ve two weeks to get fully fit for the next round and that’s the aim.”

Phil Borley, Technical Director: “It’s been a fantastic day and to take a double win in the first round of the Showdown and leave with a 27-point lead is more than we could have hoped for. Shakey had great pace today and the tyres held up really well whilst I think he outrode everyone in the two races. Glenn struggled a bit with a shoulder injury from his crash at Oulton Park, particularly in race one, but he had better pace in race two and got a decent top ten finish. He wasn’t able to show his full potential though so it’s been a little frustrating but hopefully he’ll be fully recovered in time for the next round.”

The penultimate round sees the team head to Assen in Holland with the meeting taking place onSeptember 30-October 2.