Hat-Trick For Heroic Irwin At Sunflower 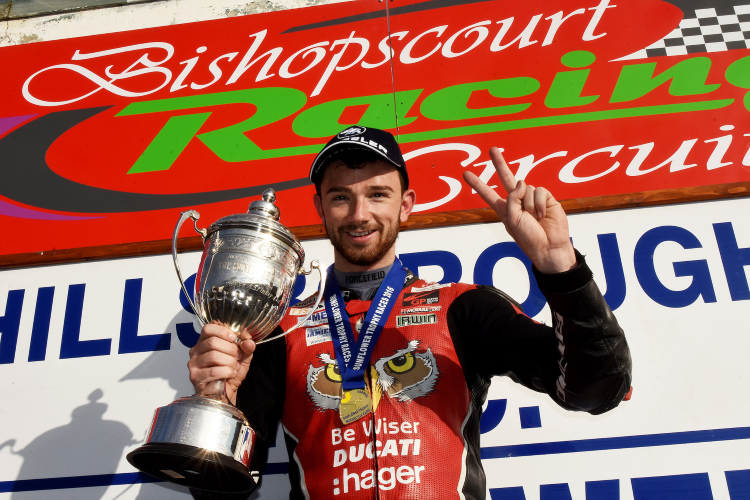 Local ace Glenn Irwin saw off the competition to record a stunning hat-trick of wins at the annual JAS Finlay Sunflower Trophy Races in his native Northern Ireland yesterday.

After a successful rookie season in the MCE British Superbike Championship, the 26 year old from Carrickfergus in County Antrim persuaded Penrith-based team boss Paul Bird to allow him to ride the Be Wiser Ducati Panigale R in front of his local fans where he swept to victory in all three Superbike races.

The results capped a memorable week for the Penrith-based team what with Shane ‘Shakey’ Byrne clinching his fifth British Superbike Championship a week ago, whilst Irwin ended his BSB season with another podium meaning he arrived at the County Down track near Downpatrick full of confidence.

Aboard the factory-backed Be Wiser Ducati Panigale R, Irwin was on lap record pace as he beat recent winner Danny Buchan as well as BSB rival Christian Iddon in front of a decent-sized crowd in the dry autumnal sunshine to send the locals home happy.

Glenn Irwin: “It's been a perfect weekend but like everything in racing we always want more. I would have loved to have gone even quicker but we went as quick as we needed to and I always felt in control. Big thanks to my boys as they worked hard and to the team and Birdy for letting us do this meeting. It’s fantastic to end the season on a high back at home with all my friends and family here to celebrate.”