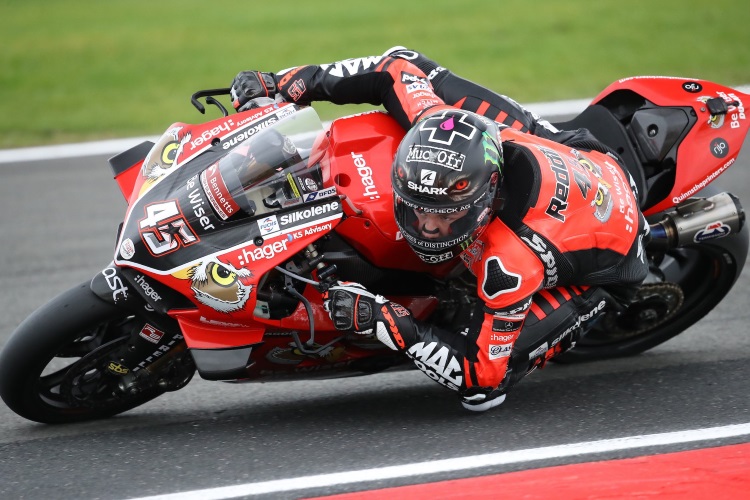 Fresh from his treble victory back in May, Be Wiser Ducati’s Scott Redding will line up in pole position for tomorrow’s opening Bennetts British Superbike Championship race at Donington Park after topping the Datatag Extreme Qualifying session this afternoon by almost half a second from Australian team-mate Josh Brookes.

Wet weather on Friday gave way to better conditions today and it was Brookes who was the quickest across the three practice sessions, his time of 1m 29.337s on the factory-supported Be Wiser Ducati Panigale V4 R putting him a third of a second clear of team-mate and championship leader Redding.

That put both riders in a confident mood ahead of this afternoon’s Datatag Extreme Qualifying session, which again saw dry conditions around the 2.5-mile Grand Prix circuit. The duo were again first and second quickest in Q1, with Gloucestershire ace Redding the quicker of the two on this occasion as they both comfortably progressed into Q2.

Positions changed again in the early stages of Q2 as the times tumbled but although former BSB champion Brookes topped the leaderboard initially it was ultimately four times GP winner Redding who headed into the final segment as the quickest rider as he posted the first sub 1m 29s lap of the weekend.

As always, it would be the eight minutes of Q3 which determined grid positions for tomorrow’s first race and although it was Brookes that again set the pace initially, former MotoGP rider Redding wasn’t to be outdone. Indeed, a succession of rapid laps, the quickest of which was 1m 28.403s saw him well inside the lap record to give him his fifth pole position of the season. Brookes was also inside the lap record and he took second place, just under half a second behind Redding, to make it a 1-2 for the team.

Tomorrow’s two races form round two of the three round title-deciding Showdown with Redding leading Brookes by 14 points. Redding has won nine races so far this season with Brookes taking seven victories after ten of the 12 rounds.

Scott Redding:  “It took me a while to get going in qualifying compared to free practice earlier in the day, but I didn’t want to make too many changes as the overall feeling of the bike had been good. For Q3, we made a small change and I did what I had to do to put in a good time. It sets me up nicely for the races tomorrow and although conditions may be different, the bike has felt good in the wet and I’m normally a good wet weather rider so we’ll see what we can do.”

Josh Brookes: “We’ve done a good job today to take second, but the first two sectors are letting me down a bit and haven’t had the speed to go with Scott. On the edge of the tyre through the high-speed stuff of Craner Curves, I’m losing a bit of time and not able to attack but through the twisty stuff at the end of the lap, the bike feels mint. We’ve a bit of work still to do with the settings but I think our race pace is good enough to make it two competitive races.”

Johnny Mowatt, Team Co-ordinator:  “It’s been a good few months since we were here earlier in the year and we had very little dry track time prior to today so for the boys to find a good setting so soon is testament to them and their respective teams and to end the day with a 1-2 in qualifying is very much a case of so far, so good. They were quickest in every part of qualifying and it bodes well for tomorrow and although the weather forecast is quite different with more wet weather predicted, we’ve been strong in the rain too. We’re confident of giving a good account of ourselves whatever the conditions so we’ll be aiming to keep our noses clean and come away with two strong races.”