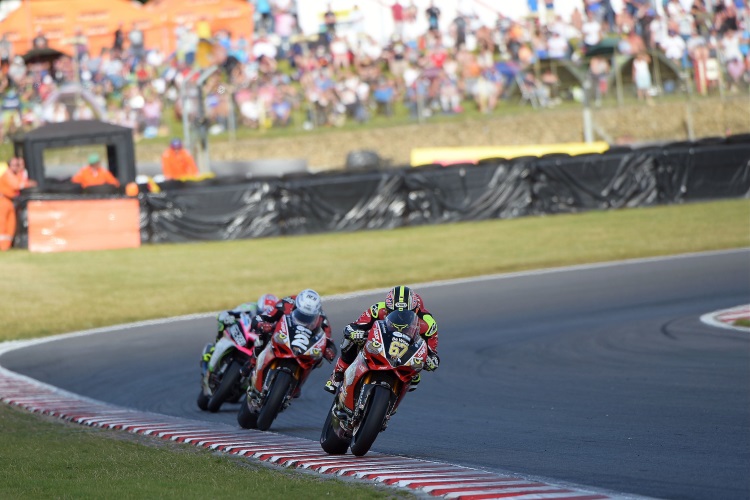 Shane Byrne takes a 17-point lead into the final round of the 2016 MCE British Superbike Championship at Brands Hatch this weekend where he is bidding for an unprecedented fifth BSB title for both himself and the Penrith-based Paul Bird Motorsport Team.

Shakey’ arrives at his beloved Grand Prix track with nine wins so far this season, including a superb double at the Kent track back in August aboard the factory-supported Be Wiser Ducati Panigale R. That took his winning tally around the track to fifteen as well as two unforgettable World Superbike Championship race wins back in 2003 and once again he’s hoping for more in front of his hordes of local fans expected to turn out for the triple-header meeting.

Originally from London and now living on the Isle of Sheppey, the 39-year-old is hoping to add to his titles won in 2003, 2008, 2012 and 2014 but faces stiff opposition from main rival Leon Haslam. Mathematically, Byrne can follow Haslam home in every race and still win the title but it’s not in his nature to settle for second place so he’s going all out for victory to add to the nine this year and 77 career wins in total.

Team-mate Glenn Irwin is hoping for some good results to end his rookie BSB season in style and following a recent bout of blood poisoning, he’s raring to go and improve on his twelfth place in the standings. The 26-year-old Ulsterman from Carrickfergus in County Antrim has managed a podium on the Be Wiser Ducati Panigale R this season at Thruxton in July so the plan this weekend is to see if he can pack the places between Shakey and his rivals to give his friend and team-mate some back up if needed.

Race one takes place on Saturday afternoon with the final two races held on Sunday and for anyone not attending the meeting at Brands Hatch, there is live television coverage of all three races, as well as the support classes, on British Eurosport 2 HD.

Shane Byrne: “Well, this is it! This is what a whole year's worth of hard work, determination and desire for a fifth BSB title have come down to. It’s the Brands Hatch triple header, we know what we need to do, we know what we have to do and I certainly know what I want to do. The plan is to give it our all and see where we're at this Sunday afternoon. I trust my team to give me the best package possible and there’s nowhere I enjoy racing at more than the Brands Hatch GP track.”

Glenn Irwin: “It's crazy that we are at the final round already. It's been a great learning year and I have been happy with my results, however I have three more races to add to my Thruxton podium. That's my plan and of course also doing whatever I can to give Shakey the best chance of winning the title. I feel so much better now I’ve got my strength back after the last couple of rounds so I’m ready to go!”