The Truth About Speeding In The UK 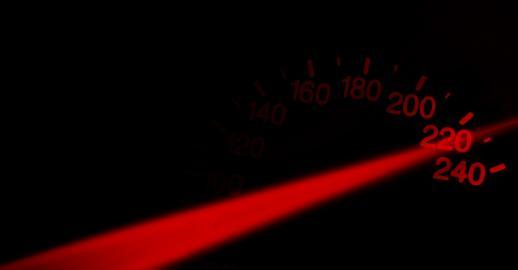 We don’t talk about it very much, but speeding is still a big problem on British Roads. While it’s easy to forget about the dangers of speeding, it’s clear that it’s a contributing factor to road deaths and injuries. And when you realise that almost half of car drivers exceeded the speed limit on the motorway in 2015, according to the Department for Transport, you know that it’s a problem that isn’t going away fast.

Why Do Motorists Speed?

There’s lots of reasons that drivers decide to exceed the speed limit: because they’re late, they believe their journey is of a higher priority than other road users, because they want to arrive earlier than intended, or they believe they are a good or better driver – and are capable of driving safely at higher speed, to name but a few.

To put these excuses into perspective, to save time on a journey, you have to either be significantly above the speed limit (at a speed which you would immediately lose your licence at) or on a very long journey (over 500 miles) to make time saving of any value. On a 15 mile drive where a driver exceeded the speed limit by 10mph and the average speed was 55mph, they would likely only save 3 minutes – and that’s before being caught at a red light, or in traffic! On a 500 mile journey, averaging 85mph, you would save just 47 minutes – which seems like a lot, until you realise that this is on a 6 hour journey, where you are likely to stop for food and stretch your legs.

However you look at speeding to make up for being late, there are no real gains to be had. The best preparation for arriving on time, or with time to spare, is to leave earlier!

Is Enough Being Done to Tackle the Problem of Speeding?

Though the number of cars exceeding the speed limit has dropped to 46% in 2015 from 49% in 2011, these statistics still show an alarming number of motorists are breaking the law. The report also showed that 52% of vehicles broke the speed limit in 30mph zones, and a whopping 84% did so on 20mph roads.

The Consequences of Speeding

The minimum penalty for speeding is a £100 fine and 3 penalty points added to your licence. The fine amount can vary depending on the severity of the offence, and in some cases you may need to appear in court, or you could even face a driving ban. A speed awareness course is often offered as an alternative to a speeding fine and penalty points, and the course aims to educate and change motorists’ attitudes about speeding.

But legal ramifications aside, the thought of having an accident and injuring yourself or someone else should be a deterrent in itself. However, this is often not at the forefront of a person’s mind while driving.

People might believe the speed limits on certain roads are unnecessarily low and may instead drive at a speed they believe to be suitable. This may be why there is such a high rate of people speeding in 20mph zones compared to on other roads, because many people feel the slow speed is unnecessary. However, motorists may not always make the best judgements if left to make their own decisions about what is safe, and that’s why speed limits are important.

Drivers should also remember that the speed limit is a limit and not a target, and in certain conditions such as bad weather, it may not be safe to drive as fast as the speed limit permits.

Do I Have To Obey Variable Speed Limits Displayed On The Motorway?

Many drivers find variable speed limits on motorways confusing. Some will argue that they’re only advisory, while others will adhere to them no matter what. However, the law is very clear on this. If the speed displayed in lights beside or above the motorway is in a red ring, then it is a mandatory speed limit and must be followed. Speed limits displayed with flashing yellow lights on each corner of the sign are considered “advisory” and usually relate to congestion or poor weather conditions. While in the second case there’s no need to stick to the restricted limit, it would be wise to, as they are only implemented in dangerous conditions.

An Increase In Speed Cameras

There are around 200 camera sites on motorways in England, some with multiple cameras, and there are 13 different types of safety or speed cameras in the UK – some fixed and some mobile.

The costs to install permanent cameras are a lot lower than they used to be, at £100,000 per mile compared with around £1.5m per mile in the early 2000s. Some of the older cameras which use 35mm film have been in use for around 25 years and are coming to the end of their life, and some of these are being replaced with average speed cameras.

In November 2015 it was reported that all working speed cameras would be coloured yellow by October to ensure drivers are not penalised unfairly. This would mark the end of the grey speed camera. If speed cameras are not easily visible, they could be spotted by motorists at the last moment, causing them to brake suddenly and dangerously. In November 2015 transport secretary Patrick McLoughlin said speed cameras should be “used for safety rather than revenue raising” and “should make journeys safer rather than lead to dangerous braking”. The end of the grey speed camera will help with this and could potentially make our roads safer.

Are we better off without speed cameras?

Northamptonshire is another example of an area without working speed cameras. All 47 fixed speed cameras were turned off in 2011, with no known plans to switch them back on. However, the cameras remain in place in case the council decides to turn them back on in the future, and also to act as a possible deterrent for out of town motorists.

There were 25 road deaths in Northamptonshire in 2010 before the cameras were switched off, compared to 32 road deaths in 2015. However, these numbers have fluctuated from 19 and 35 between 2011 and 2015, and it is difficult to determine if and how the absence of working speed cameras contributed to these figures.

In January a spokesperson for Northants County Council said “there is no evidence to suggest that decommissioning cameras in Northamptonshire has contributed to any rise in collisions or road death numbers”.

Other ways to deter speeders include neighbourhood watch or community speed watch programmes. Volunteers are provided with equipment to detect speeding, and they record information to be sent to the police, who can then take action against persistent speeders. If more communities participated in this scheme, this may help to further reduce incidents of speeding and make the roads safer.

Keeping within the speed limit isn’t just safer, but it’s also more courteous – slower speeds means less tailgating, more time for manoeuvring and reacting to hazards, and a generally calmer driving experience that everyone can benefit from.

Whether speed cameras are present and working or not, it is ultimately up to each motorist to do everything in their power to ensure that they, their passengers, fellow road users, and nearby pedestrians can all travel safely.

How Do Other Countries Deal With Speeding?

In the UK, like many other countries, speeders are fined an amount depending on how fast they were driving and how far over the speed limit they were. However, other countries operate differently. For example, in Norway drivers are fined 10% of their annual income and those who commit excessive speeding offenses can face a mandatory minimum jail term of 18 days. Finland operates a similar income-based scheme, which is why in 2015 a Finnish business man travelling at 65 miles per hour in a 50mph zone was fined a massive €54,000. In Finland, fines are calculated by estimating the amount of spending money a person has for one day and halving it. Then this is multiplied by a certain amount depending on how much the driver was over the limit – 15mph over the speed limit gives you a multiplier of 12 days, and 25mph over the limit is 22 days. Most drivers therefore pay €400-500, or between €30 and €50 per day.

What More Could The UK Government Do To Curb Speeding?

In 1991 England and Wales tried out similar ‘day-fines’, but these were abandoned after criticism from the media. However, this system could lead to many fines being higher than they currently are, and this may deter motorists from speeding.

But fines aren’t the be all and end all – road safety shouldn’t just be governed by fear of penalties, but it should also be propelled by knowledge and education. Teenagers can start learning to drive at the age of seventeen, but should our schools have ‘driver’s ed’ classes similar to those taught to sixteen year olds in the US? A formal classroom programme may help to promote speed awareness so that students know how to drive responsibly once they get behind the wheel.